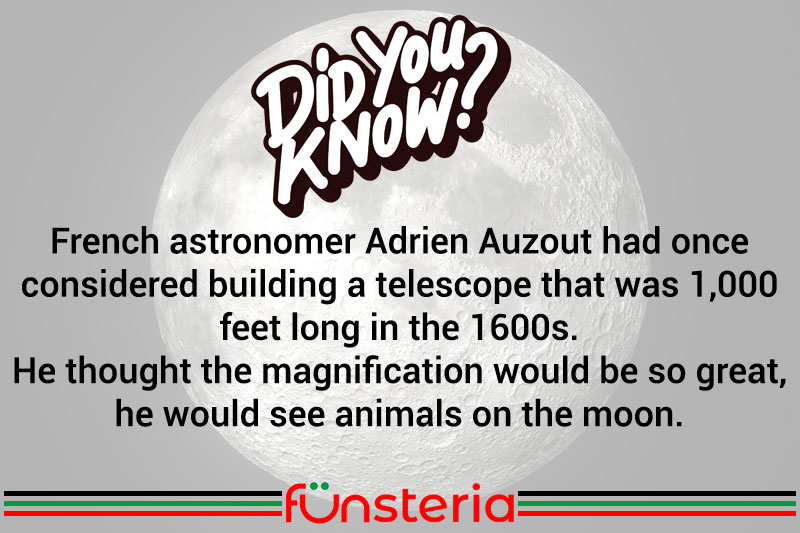 While scientists were thick on the ground prior to the 17th century, much of their work either remained in doubt, or was proven incorrect by practical application. Modern day scientists attribute this high degree of error, to the poor quality of the instruments that they were using, technology not being one of their top priorities at that time.

That would explain some of the downright cock-eyed theories and predictions regarding the movement and existence of planets, suns and moons, most of which were being examined with the bare eye. That is, until the first telescope was invented circa 1608.

While it is often debated which of three men: James Metius, Hans Lippershey or Zacharias Jansen actually made the thing, papers now in the possession of the University of Leyden indicate that is was in fact, Lippershey. As a maker of spectacles, he had accidentally held up two lens, a short ways apart, and noticed that objects at a distance were magnified while looking through both lenses. But it had to be a fixed distance, and his arms were getting tired. So he put the two lenses in a tube, and the telescope was born.

Shortly after that rough beginning, Galileo applied his knowledge of refraction to the issue, and using both a concave and a convex lens, in a lead pipe, created the first truly workable telescope. His model would be the standard for the next hundred years, until it was replaced by the telescope with two convex lenses, which provided a greater field of view. After solving problems related to unclear images, a new telescope with a twelve-foot focal length was built.

That was the focal length, not the physical length of the telescope. For really big ideas at that time, you couldn’t beat French astronomer Adrien Auzout, who theorized that the greater the length, the better the magnification. He planned to build one that was 1,000′ long, but apparently was a little “shortsighted” with regard to the logistical difficulties.