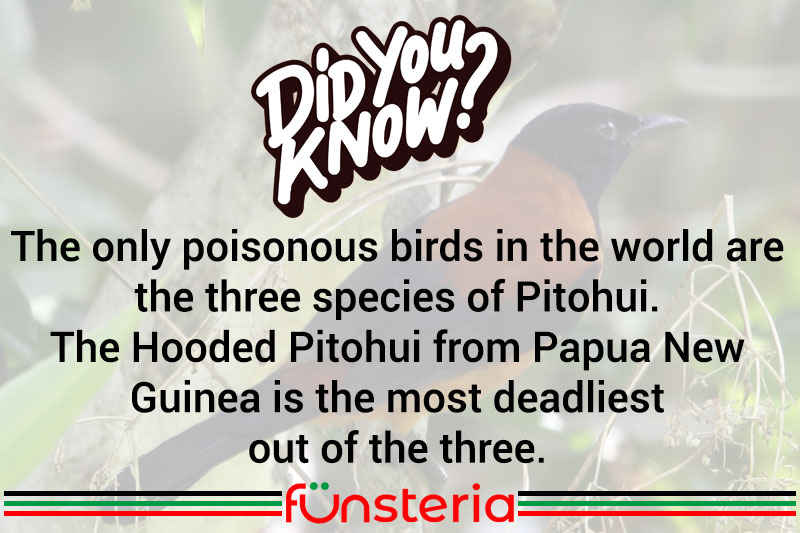 Since the dawn of time, the life forms on Earth have constantly evolved, with “constantly” often requiring millions of years. Scientists through fossilized remains are able to tell us some of the most intricate and amazing details of how a species was born, changed and exists as it is today. Which makes it all the more surprising, that something as potentially harmful as a poisonous bird, would go unrecorded until 1989.

Jack Dumbacher, who was netting birds in New Guinea, caught a Hooded Pitohui (pronounced like spitting: pittoeey), and in untangling it from his net, got scratched and bit. But it was a small bird, and not a big threat, right? Wrong. Dumbacher put a cut finger in his mouth and his lips and tongue went numb. While that was the extent of his reaction, it caused a much more significant one in the scientific community.

Tests revealed that the Pitohui bird carries a poison that is virtually identical to that of the dart poison frogs, Phyllobate. The poison is a steroidal alkaloid, never seen in any other animal or creature of any kind except the frog and Pitohui birds.

Oddly enough, the Pithohui has three species, two of which are even brightly feathered in red and black warning colors, much the same as the frogs. The Hooded appears to be the most dangerous, with the Variable being of medium toxicity and the Brown Pitohui the least harmful.

Undoubtedly, there are other bird species that have chemical self-defense mechanisms to prevent predators from eating them, but to date, this is the only bird found to actually be poisonous to humans. Can you eat them? Yes! The natives of New Guinea do eat them, but warn they must be prepared very carefully, including skinning. Even gently simmering the skin in water will produce a toxic substance