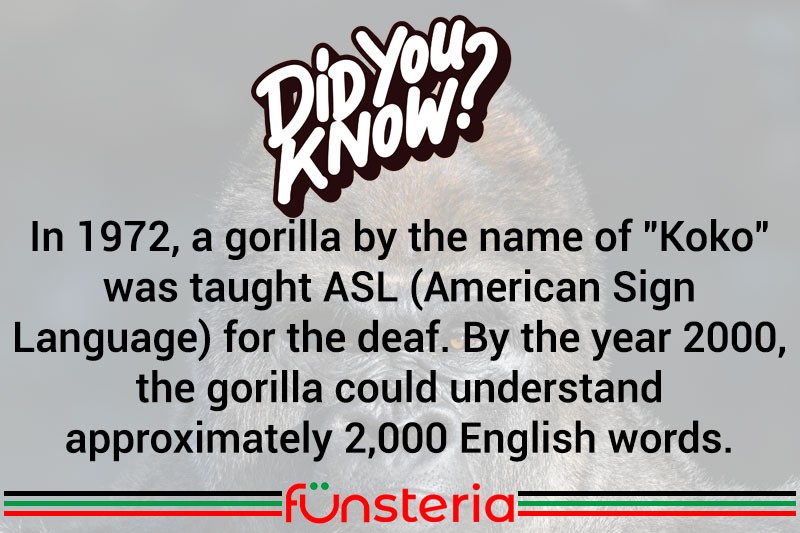 Although a relationship between man and apes has long been acknowledged, little was ever done about examining just how closely behaviors of one could be mimicked or duplicated by the other. Then a ground-breaking experiment in the mid 1960s which involved trying to communicate with a chimpanzee, set the stage for the longest-running inter species communication project in the scientific community.

The project literally is Koko, a female lowland gorilla born at the San Francisco zoo in 1971, where researcher Penny Patterson spotted her only months later. Inspired by the work of Alan and Beatrice Gardner who had done the initial investigation into how Man could teach an ape to communicate with them, Dr. Penny Patterson decided to dedicate her professional life and skills to opening the channels of communication.

A behavioral scientist with a doctorate in psychology, Patterson was at first refused access to the baby Koko, as the zoo’s project was to protect the dwindling numbers of gorillas through a careful breeding program, and the baby was as yet, too young. But Koko’s introduction to human contact came earlier than expected, when she failed to thrive in the artificial zoo environment and became ill at six months of age. After intensive medical care, she spent six months living in the home of human keepers, and the door to Patterson’s project to teach an ape ASL, or American Sign Language, opened wide.

The project, which is now 34 years old, has produced discoveries that fly in the face of preconceptions about apes and how they communicate, and have also provided scientists with a basis to suggest that Man himself originally communicated through gestures.

Koko’s years of study have resulted in books, interviews, and international celebrity status. She has participated in the first inter-species “chat” over the Internet, and as of the year 2000, had about 1,000 signs at her command, and understood some 2,000 English words. Her intelligence quotient has been estimated at 75-85 with 100 being the norm for Man.