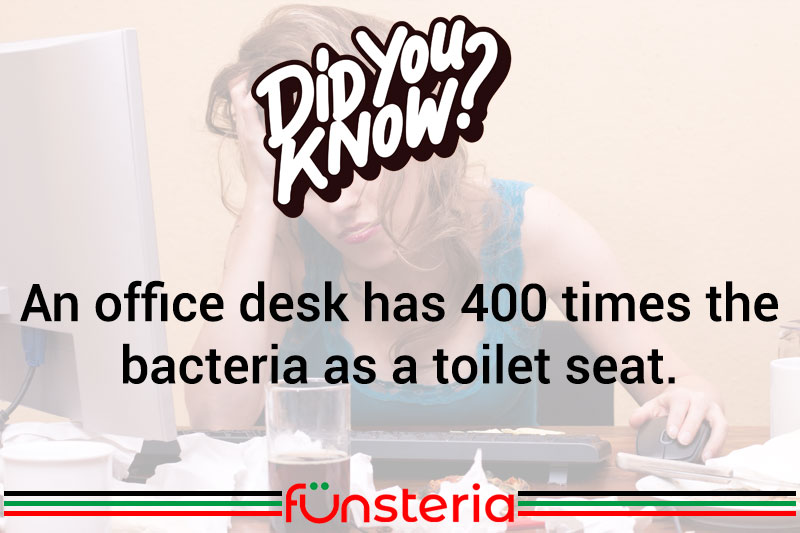 When someone goes on a health kick and starts talking about germs, and stopping the spread of things like colds, the first item they focus on is the doorknob. At home, in public, or at work, it is the single most common surface that multiple people would touch, thus increasing the chances of bacteria being left behind. But surprisingly, it’s not the most bacteria-infested surface you face all day. That would be your office desk.

A research project at the University of Arizona, carried out in 2002, discovered that you would face less bacteria eating off a toilet seat, than you would on your desk or personal workspace, where the level is up to 400 times greater.

The study, which tested telephones, desks, water coolers, doorknobs, and toilet seats, compiled 7,000 samples from major centers across the country. What they found, was that while phones ranked highest in bacteria levels, the office desk was a close second.

Food or spilled liquids and decomposable solids that don’t get cleaned off, provide the ideal start for a colony of bacteria. Add to that, items that have been in contact with bacteria elsewhere, that are set on the desk, or even unwashed hands touching the surface, and the count soars, sometimes doubling during the course of a work day.

To confirm their findings, researchers divided workers into two groups: one that wiped down their phones and office spaces each day with a disinfectant, and one that didn’t. Within two days, those with the cleaning habit saw bacteria levels drop to almost nil.