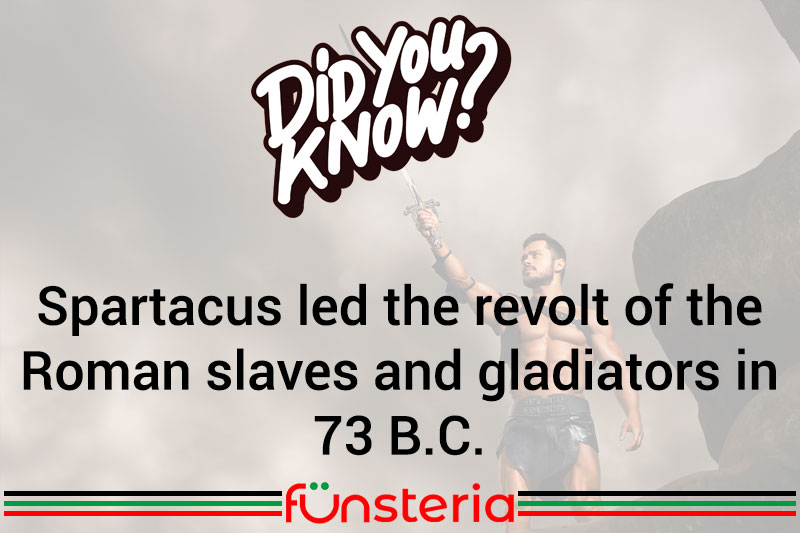 Nobody who is a die-hard fan of old movies, can possible hear the name “Spartacus” without seeing Kirk Douglas in the short little skirt thing that fighting men were allowed back in the wild and wooly gladiator days.

But in real life, Spartacus and his followers were not quite the noble and self-effacing group depicted in the movie. The real Spartacus was born in Thrace, and is reported to have served in the Roman army, possibly as an auxiliary. Historians believe he deserted, for whatever reason, and was then outlawed, captured and sold into slavery, where his skills and brute strength lead him to be trained as a gladiator, for the amusement of his owner.

But Spartacus was not amused. In 73B.C., Spartacus and another six or seven dozen gladiators escaped, seizing the cook’s knives and other weapons. The fled to Mount Vesuvius, where they established a camp with other rural slaves, some of whom could not be controlled, as they pillaged the surrounding countryside.

The Senate’s force of 3,000 recruits charged up Vesuvius, under the impression they had Spartacus trapped. But he was busy descending the back side of the mountain with his troops, and they kicked some serious Roman butt, sending the soldiers who were still standing, back home.

This would be the standard outcome of encounters between Spartacus and his slaves, and the Roman soldiers. Spartacus moved around, retreated and re-grouped, when some of his fellow slaves, notably the Gauls and Germans, decamped to follow their own plans.

The force divided, was partly conquered when the Romans decimated the Gauls and Germans. But in taking on Spartacus once more, they lost. And perhaps in a pointed reminder of his days as a slave, he took 300 prisoners from that battle and made them fight in pairs, to the death.

Fate and the massed Roman army caught up with Spartacus in Southern Italy. He was presumed killed in a battle where there were so many bodies, it was impossible to identify his. In retribution, the army took 6000 slaves captives, and crucified them along the Appian Way from Capua to Rome.