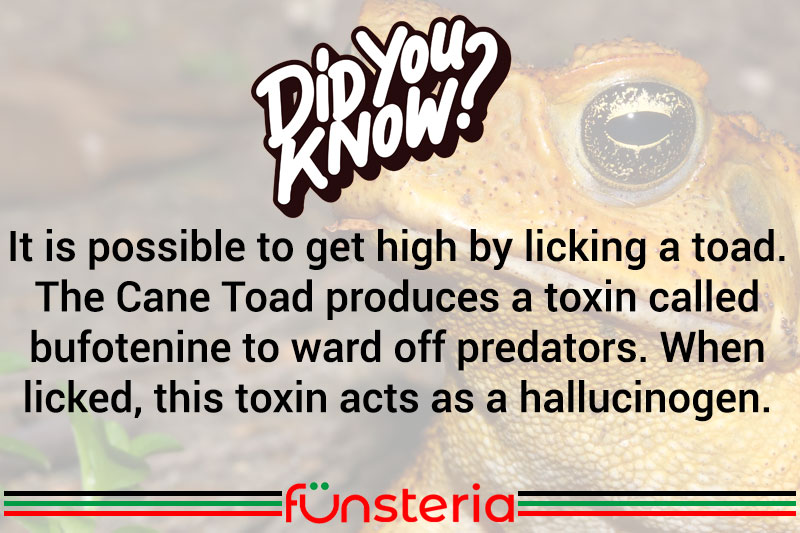 Humans lick a lot of things, believe it or not. We lick ice cream cones, stamps, and fingers to turn the pages of a book. As children, there were always lollipops, and when truly bored in winter, despite mother’s most dire warnings, we licked metal, and had to have someone come and free us with warm water. But toads?

The thought may curl your toes, but the reality can make a person cock their toes straight up and keel over from cardiac arrest. It all depends on how much you like the taste. In some cultures toads are cooked or made into soup, and the level of toxicity depends on the quantity of toads.

However, the latest fad is not eating toads, but licking them. Because the chemical, bufotenine, which is produced in glands behind the eyes of Cane toads, causes a pretty good high if you just …sample it.

Although there have been reports of toad licking in the Southwest, most law enforcement agencies have a hard time taking it seriously. Epidemics of toad licking are few and far between, but the DEA has come across the substance bufotenine after drug raids.

The Cane toad lives in warm, and humid climates, primarily the American south, and South America. But in 1935, 100 of the creatures were exported from Hawaii to Australia, where they were suffering a crisis of beetles eating their sugar cane crops. The toads, which dine on that kind of insect, promptly ate everything in site (except the beetles), and multiplied like crazy. Today, the government is busy trying to figure out how to eradicate the pests, which poison a significant number of pets, as well as a chain of predators, who eat the toads, and are then in turn eaten by their own predators. Not only that, but there appear to be a rising number of cases of toad licking…