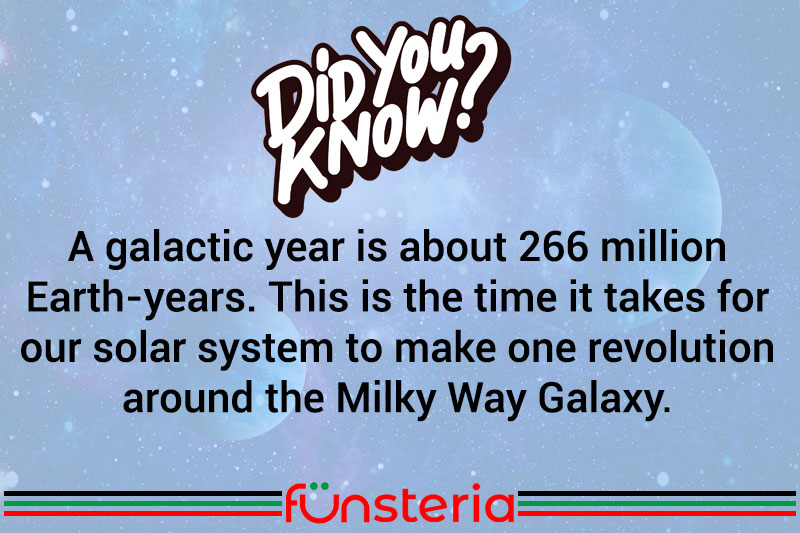 Have you ever noticed how the same span of time can seem longer under different conditions? That’s because time is relative, and sometimes when the relatives come to visit, an hour can seem like a week.

Count your blessings that relatives don’t stay for a galactic year. Because time in terms of orbiting the center of our galaxy, is really something else.

Pretty much everything in our galaxy and most of the Universe, is in motion, often in circles. Earth turns on its axis. The moon orbits Earth. In turn, Earth orbits the sun. And the entire arm of our solar system, turns around the center of the Galaxy, which in our case is the Milky Way.

For every complete 360-degree rotation of the Earth, we pass one day on our planet, in our time reference. Time in the galaxy, is relative to our planet’s orbit around the Sun, taking into consideration, its position in the Galaxy.

The time it takes for the Sun and all our neighbor planets to orbit around the Milky Way is referred to as a galactic year. But how long is that in our time?

Using 250km a second as the average speed of all those planets, moons and the Sun traveling en masse, it would take 266 million Earth years to make the circuit. If we have always moved in this pattern, and at this speed, since creation, then estimates say that we have revolved around the Milky Way, 20 times, or 20 galactic years.