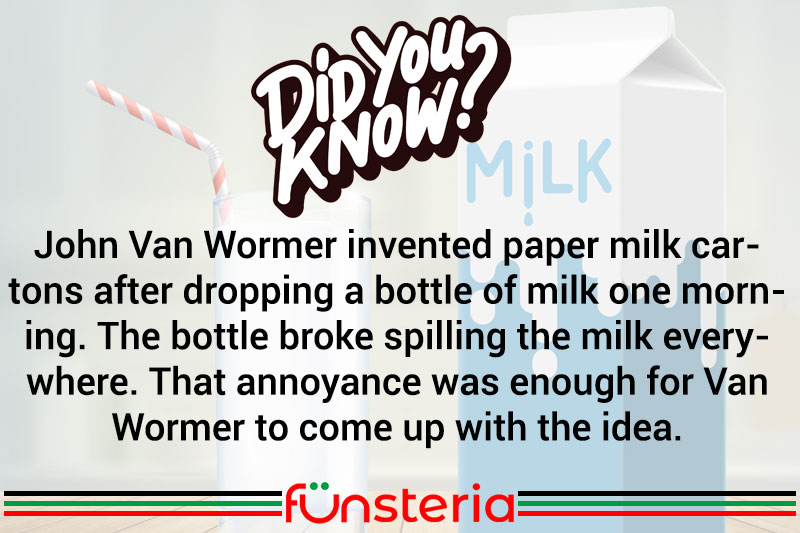 No doubt your grandparents, or even old black and white movies introduced you to the novel idea of milk that came in bottles. But from the very first day that milk was sold in stores or by delivery, that’s how it was packaged. Because, well, that’s all there was to put it in. The containers had to be of a convenient size for consumers, for example pints and quarts, and of course, they could always be sterilized and used over. Sounds pretty good, eh?

Well, it was. Unless you dropped one. That’s what happened to John Van Wormer, who with wet shoes, feet, and a mess of glass on the ground, decided there had to be a better way. In 1915, he was granted a patent on a paper carton, which he called “pure pak, because it could be thrown away after a single use. But it was an invention with glitches, since paper wasn’t going to hold liquid very long. Then there was the matter of building a machine capable of manufacturing them in quantity. Not until 1937, did the milk carton get off the ground, and onto grocery shelves. But even then, old habits died hard, and the bottle remained the most popular container well into the 1950s, when production of Van Wormer’s cartons soared to 20 million a day.

Finally, with the cost of glass rising, and the obvious advantages of lighter containers being valued by supermarkets, the carton replaced bottles for good.