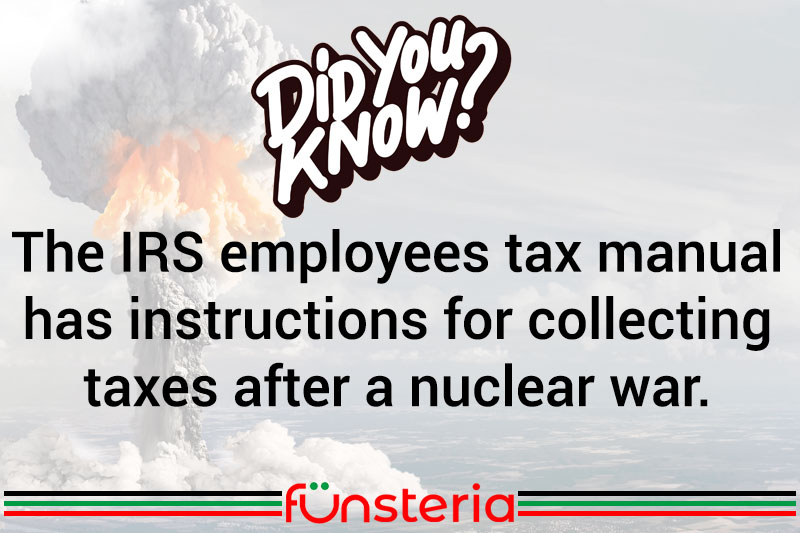 April 15 is a date that can make most people cringe. That’s the day the IRS holds out its hand and says “give”. It should be so simple, but first there are the receipts, the forms, and the records. Paying taxes just isn’t what it used to be.

For one, the IRS tax laws in 1913, were a mere 11,400 words. The Declaration of Independence is only a couple thousand words longer, and the Gettysburg address is brief indeed at 269 words. Now, the Bible is a lengthy book with 773,000 words. But it has nothing on today’s tax laws, which run to an astounding seven million words!

Can you see the forms piling up? You should, because the IRS prints enough each year to require the harvesting of 300,000 trees for some eight billion pages. End to end, you’re looking at a paper trail that is 672,000 miles long.

If it wasn’t bad enough that paying taxes takes 38.2% of the average family income, a good 60% of Americans are forced to used paid services to prepare their taxes each year. And the amount they spend in complying with federal tax law would pay for every motor vehicle manufactured in America over the fiscal year.

But the ultimate in absurdity? In 1989, revisions to IRS law laid down the exact procedure for the department to follow in the event of nuclear war. Immediately after an attack, the IRS was to prioritize itself and collect those taxes which yield the most income.