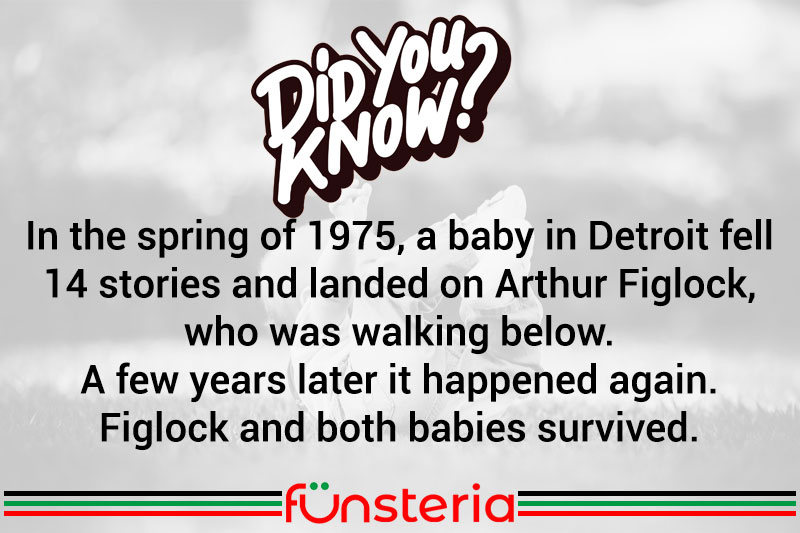 Windows seem to almost invite accidents. Naturally, we seldom hear of people, children for the most part, falling out of ground floor windows. It’s the “higher ups” that attract attention, particularly when what goes out, manages to survive the plunge.

Children are more often the victims than adults, but occasionally it’s both. In September of 2001, a mother and child both made quick exits from the third floor of a hotel in Grand Chute, Michigan. A 21-month old toddler was playing on a window ledge, when the screen gave way and he fell outside, and onto the lawn underneath. His mother, who made a dive to grab him, followed him out the window and to the ground. The child suffered minor injuries to his face, and the mother broke her ankle.

Of course, the distance wasn’t far enough to achieve terminal velocity, the point at which the rate of falling plus air resistance, balance out and acceleration stops. More than 60 years ago, Hugh de Haven, a physiologist, wrote in a paper how eight people survived falls of between 50 and 150 feet on dry land, mostly due to some object breaking their rate of descent.

Such was the case in 1930, when Arthur Figlock was strolling down the streets of Detroit. While passing by an apartment building, a toddler fell from one of the high windows onto Figlock, and both survived. More amazing, is that a year later, on the same street, the same child fell from the same window…and again landed on Figlock. And both survived.