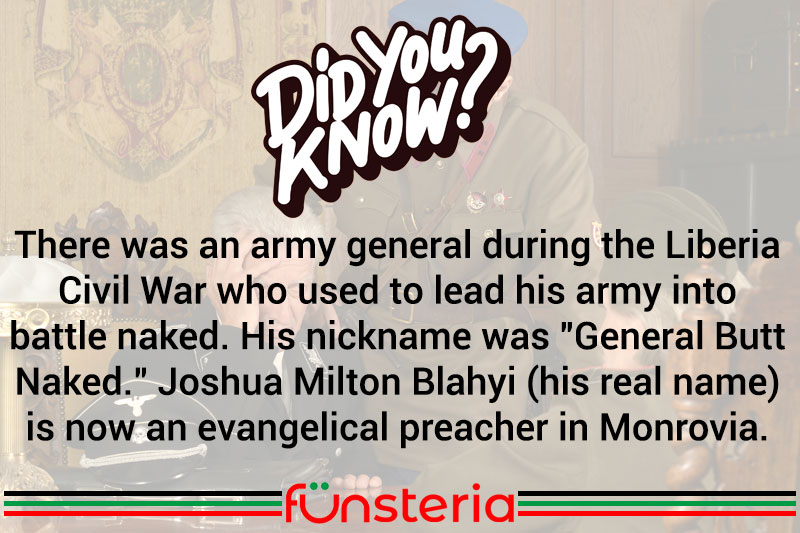 When Joshua Milton Blahyi said that, he usually meant their heads. And limbs. Then they’d all sit around and have a swig of warm blood before charging off to battle with no clothes on.

That’s how he acquired the name “General Butt Naked”. Blahyi was one of the wildest, meanest, and most unstable generals in the army during the Liberian Civil War that lasted from 1989-1997. He claimed that his behavior was all due to a phone call from the devil, when he was only 11 years old. Satan told him just how to conduct himself in the worst possible ways, and Blahyi complied with absolute loyalty.

During the war, he would sacrifice a victim, usually a young child, before every battle, chopping off their limbs afterwards and sharing the blood with his men. They would then get tanked up on drugs and alcohol and charge off to battle, often emulating Blahyi who would lead the troops wearing nothing but his running shoes. Sometimes the accessorized with purses stolen from the local natives. “Butt Naked” was convinced, likely by the devil, that going nude was some kind of magic charm against being wounded.

When the war started winding down, Blahyi had an epiphany, delivered by…yes, you got it right…the telephone. Only this time it was God. He was scolded and told he wasn’t the hero he thought. So he stopped doing all those bad things, and became a preacher and leader of a Christian movement in Monrovia.