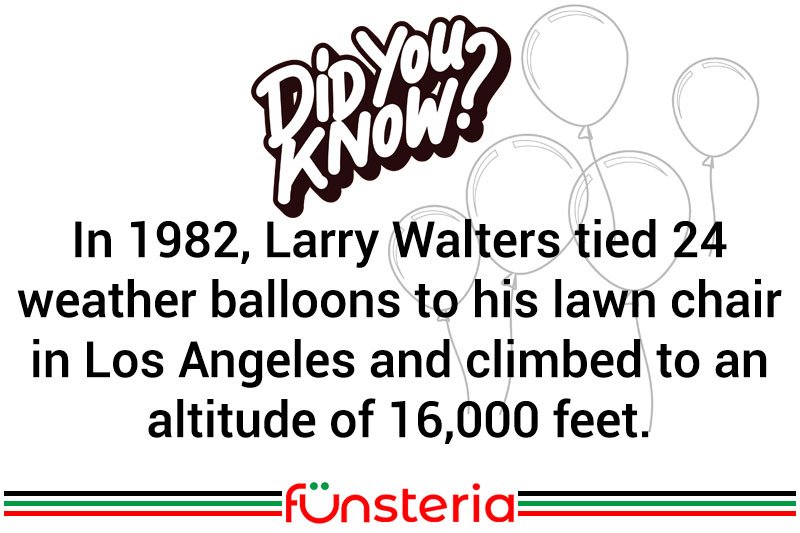 For many years, it was suspected that the tale of the lawn chair pilot, who soared to 16,000 feet near LAX, was a spoof, an urban legend, a bit of fun…but they were wrong.

The Internet circulated what appeared to be a newspaper story, accompanied by photos of one Larry Walters, seated in his specially equipped lawn chair, and another photo that showed a series of balloon clusters shooting up through the sky, with the lawn chair dangling underneath.

For once, the story was true. In 1982, Larry Walters of Southern California, satisfied a lifelong dream to try his own unique method of flying. He went to a Navy Surplus store and purchased 42 weather balloons and numerous tanks of helium. He then took a lawn chair and equipped it with padding, loaded it with supplies like lunch, a CB radio, and a BB gun, with which he proposed to pop balloons, one at a time, in order to get himself back to Earth.

Walters theorized he could rise as much as a few hundred feet, and that he was all set. He was wrong. Walters had anchored the chair to the bumper of his jeep with several ropes. Upon cutting the first rope, the inflated balloons’ upwards drag was so strong, it snapped the remaining ties, and his chair shot into the air. And kept on going. Walters glasses fell off in the launch.

At times, the chair reached 16,000 feet, where it was very cold. Walters attempted to bring himself back down, but after popping a few balloons, he dropped his gun, and was literally trapped in airspace, where he was reported to air traffic controllers by the startled pilots of both TWA and Delta planes.

After several hours, temperature and time took care of his problem, and brought the chair down in Long Beach, California, where it tangled in power lines and caused a large blackout.