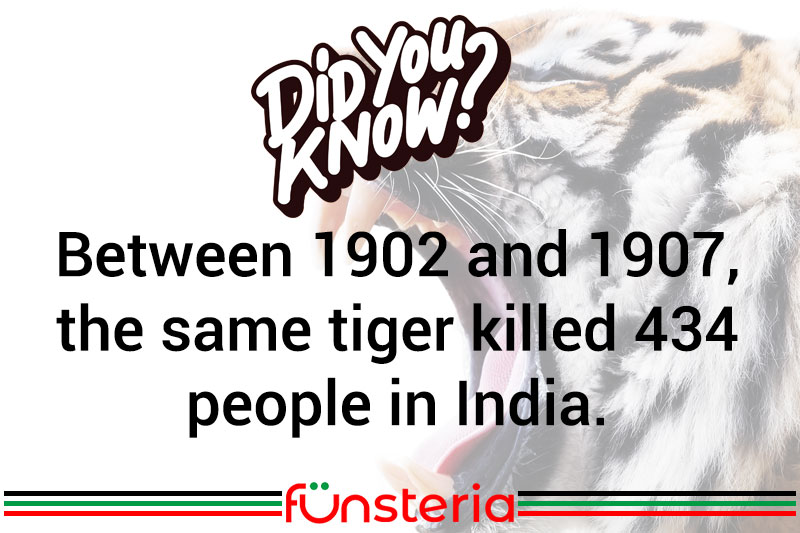 Lions and leopards have been known to attack and kill humans, but it’s the tiger who earned the label “man-eater”, and nowhere are their attacks more prevalent, than in India.

From 1902-1910 the country recorded an average of 851 deaths due to tiger attacks, but in 1922, there was a whopping 1603. One tiger, from the Champawat area, was reputed to have killed 434 people by itself, before being shot. However, given the higher population of the animals back then, and the fact that they attack from behind, it’s questionable whether it was the same animal.

The tiger will not normally stalk human prey. In fact, they are a somewhat lazy hunter, following potential victims from behind and then making a rush to leap on their backs. But if they miss, they seldom pursue their lost meal.

Their normal diet is comprised of larger animals like young buffalo, who are brought down either with a bite to the back of the neck, or by knocking them down, and then grabbing them by the throat until the animal suffocates. This has the benefit of keeping the tiger out of the way of horns and hooves, as well.

Once the prey is down, the tiger will start dining, eating up to 85 lbs. of meat at a time. If the kill is undisturbed, they will return to it for 5-6 days until it is gone. This means that a major kill is only made every 6-8 days, depending on the family unit.

A tiger hunts alone, but they have been observed with family members all hunting in the same area. Actual kills in the wild are rarely observed by researchers, who base much of their data on the tiger’s attack habits, by studying tethered prey.