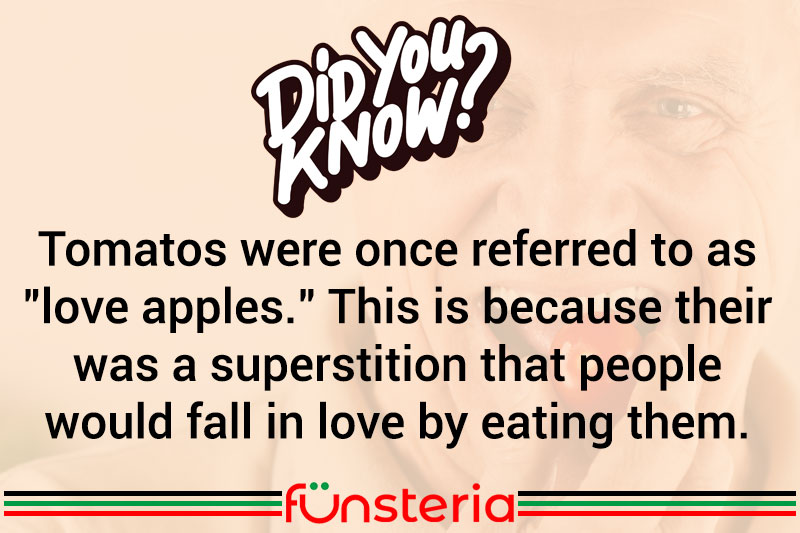 The plant we know today as the tomato, is thought to have originated in Peru, and “migrated” to Mexico where they started to cultivate it around 700B.C. Records of a tomato, squash seed and chillies dish, may be the first salsa recipe. The “fruit” (scientifically speaking, that’s what it qualifies as) was discovered and taken back to Europe by conquistadors.

At that time, it wasn’t the brilliant red globe that you find in the grocer’s. Their apple, or “pomi d’oro” as it was termed in Italy, was literally translated “golden apple”. When the red varieties appeared, nobody is certain, but it was cultivated in England, as early as 1554, although as a decorative ornamental. Because the English were convinced that it was poisonous. On the other hand, the French enjoyed the rich, juicy, succulent fruit so much, they called it the “pomme d’amour”, or apple of love, the superstition being that those who ate it, fell in love. But the English weren’t having any of that nonsense.

The erroneous belief about its edibility followed the tomato to America, even though it was widely known to be used in cuisine throughout Europe. Not until grower Robert Gibbon Johnson announced he would eat a whole bushel to prove they were perfectly fit food, did the “civilized” world cave in. Not only did Johnson complete his feat, (much to the disappointment of a crowd of thousands), he went on to promote its cultivation and popularity in the new country of America.

But even though superstition called it the “love apple”, is the tomato really a fruit? Scientists say yes, because it is the “fruit” of a vine. On the other hand, the U.S. Supreme Court said “no”, in 1887 when it was called into question under the tariff act, which taxed all vegetables. They determined that “Botanically speaking tomatoes are the fruit of the vine, just as are cucumbers, squashes, beans and peas. But in the common language of the people, all these are vegetables, which are grown in kitchen gardens and are usually served at dinner in, with or after the soup, fish or meats and not, like fruits generally, as dessert”.