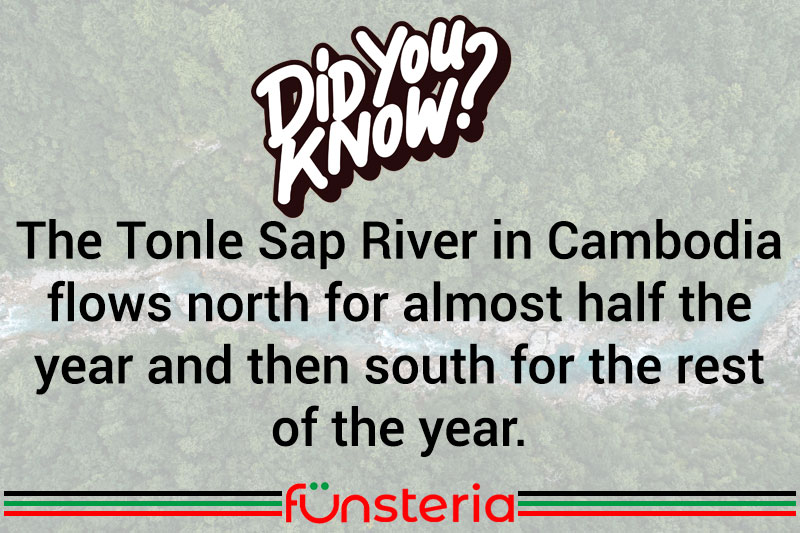 Humans are used to getting things backwards. But a few things in Nature go backwards all by themselves, and for perfectly good reasons. The Mississippi River in America flowed backwards after an 1811 earthquake. The Reversing Falls in Saint John, New Brunswick in Canada, also flows backwards twice a day, as the tide comes in and out at the edge of the ocean. And in Cambodia, the same phenomenon occurs every year, in the river that leads to Southeast Asia’s largest freshwater lake.

The Tonle Sap is actually a combined lake and river system, with the lake portion measuring some 2700 sq. km., and about a meter in depth for most of the season. But as with many things during the monsoons, all that changes, much to the benefit of millions of people.

With the continuous rains swelling the Mekong River to which the Tonle Sap connects, the flow is actually reversed, and instead of water trickling out of Tonle Sap, it rushes in and increases the size of the lake to 16,000 sq. km. and nine meters in depth. The increased water flow brings fish and creates the perfect spawning environment, which means a fishing industry that supports over three million people. This single body of water is responsible for 75% of the fish caught inland, in Cambodia, and constitutes 60% of the protein taken in by the country’s residents.

In addition, the rich silt brought in by the Mekong, fertilizes the banks of the Tonle Sap over which it flows, leaving fertilized ground for growing crops when the water’s flow reverses, and the fish retreat to the Mekong.