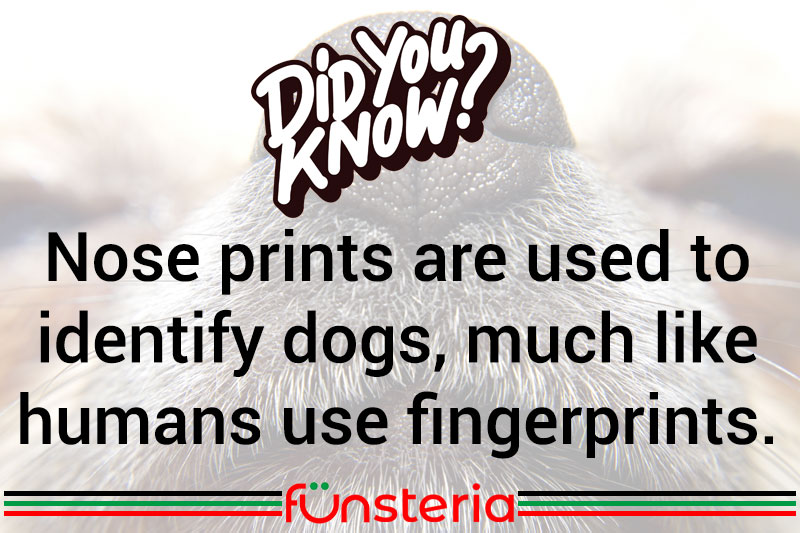 No, of course your dog has no fingers. Nor would his paw prints be of much use, since one set of muddy prints on a floor, look much like another. But did you know that those slobbery nose prints they leave on your house and car windows, are as individual as the human fingerprint?

More than 60 years ago, the Canadian Kennel Club began accepting nose prints of dogs for identification purposes, it having been proven that the surface of the dog’s nose presented features as individual as the whorls on our own fingers.

The nose print as an identification system was partially replaced by the invention of the tattoo, in which a breeder was given a series of letters that was theirs alone, by a registering body, such as the AKC or CKC. They then added numbers and letters according to the year, number of puppies, etc. For many years, this was the system of choice, the tattoo being applied with a stapler-like device of tiny needles forming the shapes of the numbers and letters. Ink was smeared on the dog’s ear or inner thigh, and the tattoo device clamped repeatedly, to drive the ink into the tissues. While this was definitely an easier method of I.D. to interpret, unless the tattoo was applied properly, they often faded, or lost portions of the numbers and letters.

Today, there has been a mass move to use microchipping as identification. A tiny capsule the size of a grain of rice, is inserted in the fat pad between the shoulders of a dog, with a special, disposable hypodermic needle. The capsule having “clawed feet”, anchors itself in the fat, where a scanner passed over the dog’s shoulders, can then pick up the number, which is registered with the kennel club and/or manufacturer.

Nose prints are still accepted by many registries, but finding someone who can interpret nose prints is increasingly difficult.