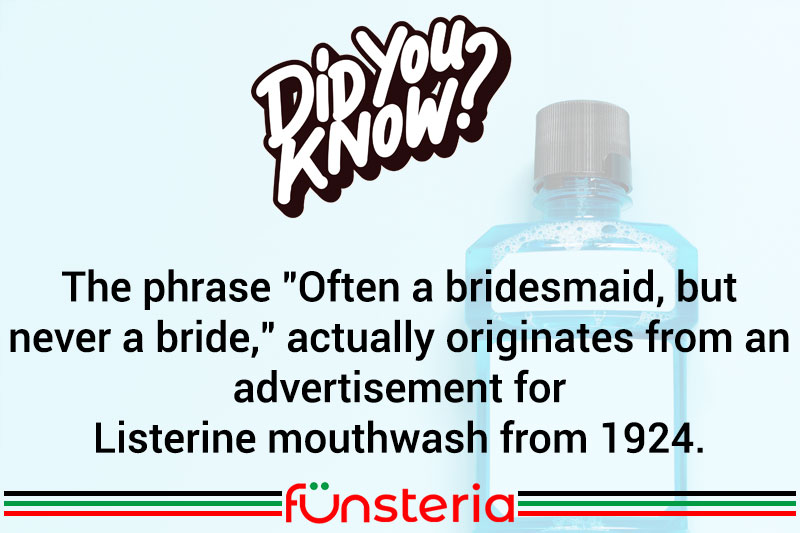 Pity the poor bridesmaid, who has always played second fiddle to the blushing bride, in the beginning for her safety, and later, because she had halitosis.

The origin of the role of bridesmaid goes back several centuries, when friends of the bride would dress the same as she had, in order to confuse any evil spirits lurking in the vicinity, ready to snatch the bride away from her intended. Over time, the role changed to one of “support” from her friends and family members. And of course, a chance for everyone to point and say “but she still isn’t married.” Then two creative minds decided to capitalize on the role that has come to traditionally mean second place, second best, not quite up to snuff, etc.

In the mid 1920s, two advertising executives, Gordon Seagrove and Milton Feasley, were hired by the makers of Listerine to delicately present the subject of bad breath to the public. They created an ad campaign centered on the fear of halitosis in a social situation, the most popular being a commercial depicting “Edna”, who approaching her 30th birthday, was still single, due to bad breath. She was, they said, “always a bridesmaid and never a bride.”

While they popularized the phrase, they did not create it. It was either inspired by, or subconsciously taken from a Victorian music hall tune called Why Am I Always A Bridesmaid? by Fred W. Leigh. As the lyrics go: Why am I always a bridesmaid, Never the blushing bride? Ding! Dong! Wedding bells Always ring for other gals.