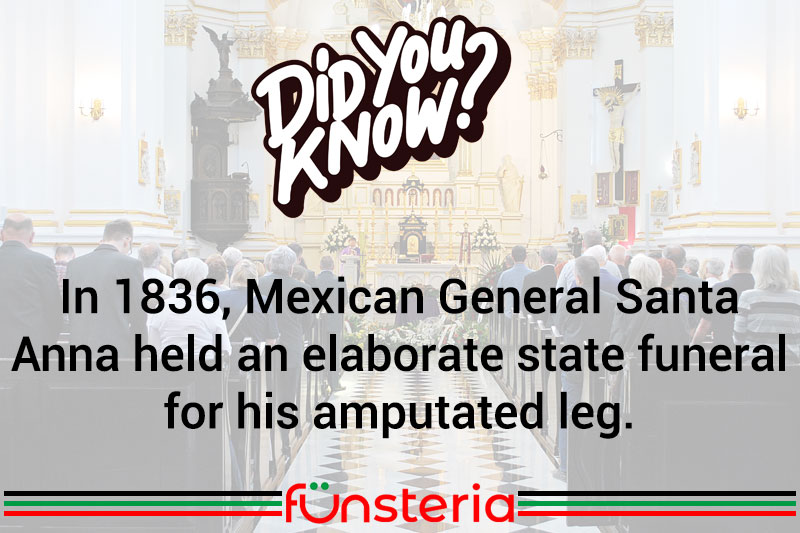 Santa Anna, the Mexican general, is perhaps best remembered for the bloody battle at the Alamo and his execution of nearly 400 Texans at the Goliad Massacre. The intensity of his attacks on U.S. troops, was only one sign of a personality whose drive for success would stop at nothing, and would often take some bizarre turns.

Always on the lookout for an opportunity to move himself up from humble beginnings, Santa Anna joined the Spanish Army in 1810 at the age of 16. Mexico had just declared her independence and the conflict held potential for advancement. But not enough. Three years later, he switched sides, and learned how to be cruel, something he used with great relish in driving the Spaniards from Mexico. The public hailed him as a hero, and that taste of adulation would become an all-consuming passion, that had Santa Anna constantly scheming how to capitalize on his personality and image.

Santa Anna lingered on the fringes of the political/military scene until the time was right. That time came in 1833 when revolutionaries killed the Mexican president. Santa Anna, using his overpowering personality, seized power and named himself president, an office he held until 1837. His reign was a dictatorship, as it would be in subsequent spells in office. In order to hold onto the public perception of his bravery and ferocity for Mexico, he promptly marched on and put down any hint of rebellion, including the state of Texas’ declaration of independence in 1836. After the bloodbaths of the Alamo and Goliad, Santa Anna was taken prisoner by Sam Houston and his troops. Held captive in the U.S. he was ousted from office as president, but not before he had signed an agreement to let Texas separate from Mexico.

He returned home in 1837, and plotted his comeback. An attempted invasion by France the next year provided a platform to show off his dedication to Mexico, but in the battle, he was hit in the ankle by a cannon ball and had the lower part of his leg amputated. Ever alert for opportunities to engage the people’s attention if not affection, he had the leg buried with full military honors, and from then on, when leaving for a campaign, would ride through the streets, waving his wooden leg over his head.

Santa Anna’s iron grip on Mexico was pried open in 1855, the last time he served as president. He was never able to achieve the same popularity again, and died in relative obscurity and poverty, in 1876.