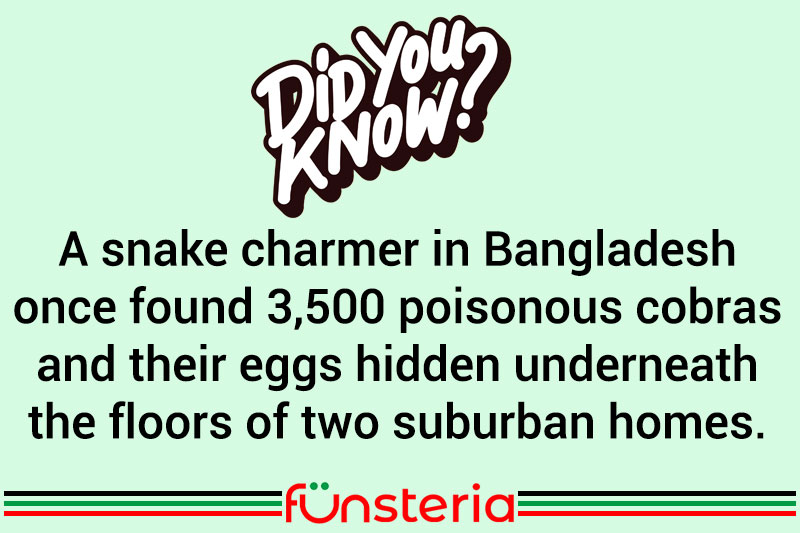 Most people prefer to see cobras in a movie, where they emerge with sinuous movements, from the basket of a snake charmer as he mesmerizes them with his music. But occasionally, these sssssssslithering charmers turn up where they’re least expected.

Cobras are venomous snakes, recognized by the trademark hood behind their heads, which expands when they are threatened or angry. The most well known, and feared (for good reason) is the King Cobra. This particular variety is unique in that when they reproduce, the female pushes together leaves, grass and other materials to make a nest for her eggs, then stays there with them until they hatch.

The average King Cobra is a mere 12′ long, but specimens measuring 24′ feet have terrified natives and researchers alike, in the Asian regions where they are normally found.

In April of 2002, snake charmer Dudu Miah was called to a home in Narayanganj, Bangladesh, where two cobras had been spotted, and not welcomed. After capturing the two specimens that were showing themselves, Miah began digging around the house. Cobras are apparently very neighborly, and will often move into or under a house, where they feed on the rats and other vermin.

The snake charmer dug up the floor of the home where the snakes had been spotted, and that of another house next door. Underneath, he discovered 3500 young snakes and eggs, which sent the neighbors fleeing into the streets.