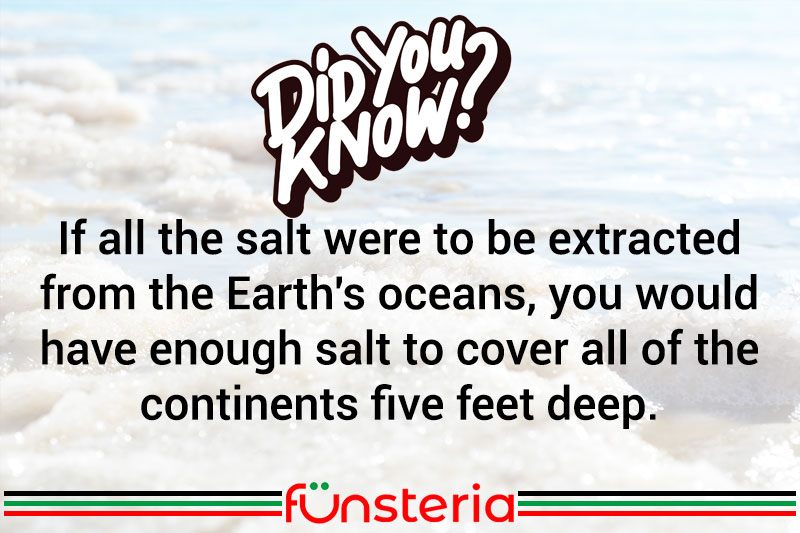 A lot of marine expressions are more or less, self-explanatory. The terms “old salt”, “salty sailor”, and “salty sea dog”, all refer to experienced sailors, men who spent so long at sea in the days of tall ships, that their clothes and everything else on board, were covered from salt left by the ocean spray.

And the ocean is salty…very salty. Consider first, that the Earth is actually more water than solid land. Water covers just over 70% of the planet. Although a small percentage of that, is fresh water, the majority is the salty water of the ocean.

The salinity of ocean water is approximately 3.5%, which equates to one square mile of sea water containing 166 million tons of salt. If you could manage to extract all the salt from all the oceans on Earth, you’d have a layer of salt that would cover every continent, five feet deep.

The specific salinity of an ocean varies according to its location, but the most concentrated body of salt water, is Great Salt Lake, at 28%. This small ocean became landlocked at some point in Earth’s development, and a certain measure of dehydration, increased the salt level.

Why are the oceans salty? Because in the beginning, when rocks broke, volcano eruptions and other events caused rock to split and open up. Salt and other minerals were brought to the surface, where they would eventually run off into the oceans. This process continues today, with salt being added from land runoffs, and also from rock on the ocean floor.