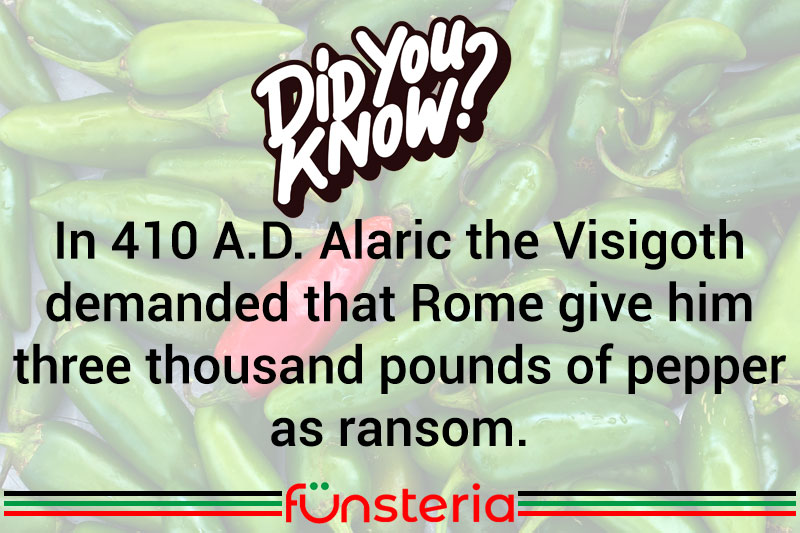 Okay, so it might not have been Jalapeno pepper, but the piquant spice, certainly had its role as literally, the key to Rome.

By the fourth century A.D., it had become the practice in the Roman Empire, to use “outside” forces for the majority of their troops. This was due to both logistical and strategic reasons. In the provinces, a long session of taxes that had burdened them beyond their limits, meant they were unable to supply the Empire with the usual number of troops. And since they had to get soldiers from somewhere, the Empire hired foederati, irregular troops recruited from Germanic regions, which would be under Roman command. This would not only reinforce their numbers, but it would mean that no Roman would ever acquire the backing of so many soldiers that he could be a serious threat to the Emperor. And since the foederati were not eligible for the leadership positions of the “real” army, it kept them at a distance too. For a while.

In the fourth century, Alaric, one of the Visigoths, was the leader of the foederati, and eyeing a position as general in the regular army. But the Emperor died in 395A.D. leaving two sons to rule, one a minor. Alaric did not get the honor he sought, and when the Visigoth troops suffered heavy damages and no rewards after a successful campaign on behalf of the Empire, they placed Alaric on a shield and raised him up as a king.

Beginning in 400A.D. Alaric and his Visigoth forces would harass different parts of the Empire with varying results. Finally in 408A.D. he laid siege to Rome, only to find he hadn’t the forces or weapons to beat it in a fair fight, so his forces blockaded the city. In the end, Rome capitulated, and paid Alaric a ransom of precious garments in silk and leather, 2,000 pounds of gold, and 3,000 pounds of pepper, a commodity so prized for its flavoring properties and so scarce because of limited and strictly controlled imports, that it was valued on a par with gold.

But alas…Alaric was not content. He would raid Rome twice more over the next two years, the second time by another blockade which gained him advantage over the city for less than a year, and the third time by managing to break through their defenses to sack the city before leaving, never having been able to pry from the Roman Senate or Emperor, the only thing he really wanted- a leading role in the regular army.