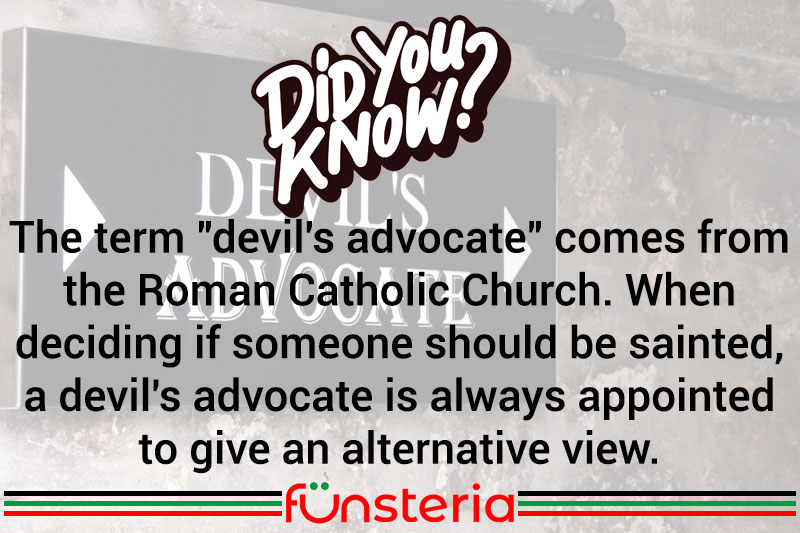 More like what the Devil, was saying. Or, that was the idea. People often step into an argument, claiming to be the Devil’s Advocate. What they usually do, is take the unpopular side of the discussion or a position that is contrary to the one being promoted. Some do it out of genuine intellectual or other interests, while there are people who enjoy the role, simply to tweak a nose or have fun with those participating.

But was there ever an advocate of the Devil? Yes, but oddly enough, he wasn’t arguing the Devil’s good points. He was arguing all the points that the Devil would present, had he been present. And in church, no less.

For the Devil’s Advocate was an official office of the Catholic Church, instituted in 1587. It lasted nearly 400 years, until Pope John Paul II abolished it in 1983. The advocate’s role was to argue against the canonization of nominees for Sainthood, presenting all contrary evidence that a given person warranted the honor, and picking apart the evidence given to back up the nomination. When the Devil’s Advocate was no longer there to give “the other side”, it paved the road for a phenomenal 500 canonizations and 1300 beatifications during John Paul II’s reign.

Clearly, whoever served in that office must have been extremely effective, since the Popes who had served throughout the 20th century had never managed anywhere near those totals, even taken all together.

However, there are those secular devil’s advocates, who argue that the role should never have been eliminated, since it ensured that only the truly saintly made it through the process.