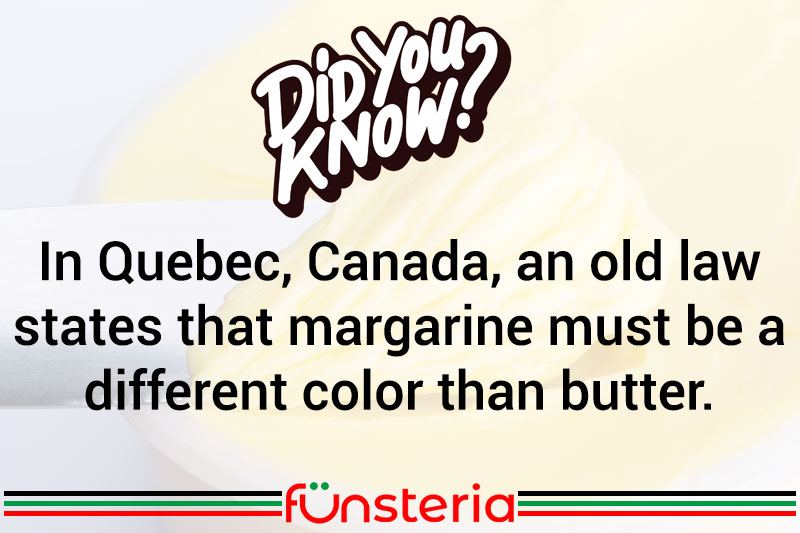 Believe it or not, there is one last bastion in North America, that clings to the purity of that most delicious of milk-based products, butter. It’s the province of Quebec, in Canada, where the Supreme Court has ruled that their laws prohibiting the sale of colored margarine are not exclusionary or in conflict with the rights of free speech.

The battle over butter and margarine, goes back more than a century, with the first shot fired by the Americans, who in 1886, levied a heavy tax on the non-dairy item, to protect the farming industry.

But the advent of WWI caused Canada to lift its ban on the product from 1917 to 1923, due to the wartime shortages of dairy goods. That opened the door for the imposter to slip through, greased by its own oils.

The province of Newfoundland, which in 1925 was still a part of the British Empire, was home to the Newfoundland Butter Company, which was doing a brisk business in bootleg margarine. So good were sales, that the Unilever corporation bought them out with the anticipation of moving their European operations to North America. Overseas, they were already doing big business with a spread that was made from whale oil.

In 1948, the same year that Newfoundland joined the Confederation that was Canada, the federal law against selling margarine was repealed, and it was made a provincial jurisdiction. The Newfoundland Butter Company officially became the Margarine Company and continued to supply Canada with the fake yellow stuff.

Slowly, the provincial laws were abandoned as well, except in Quebec where Unilever began challenging the law in 1997, a campaign that ended, at least temporarily, with the March 2995 ruling that Quebec is entitled to regulate the sales of colored margarine which might be mistaken for butter.