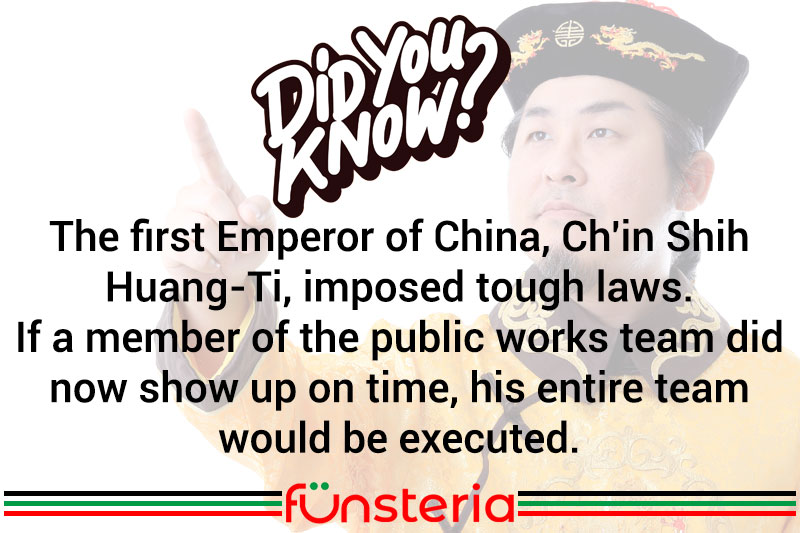 You think that your boss is tough? Be glad you weren’t a worker in China, in 247B.C. That’s when the 13-year old prince Ying Zheng ascended the throne. But this was no uncertain adolescent. He had already been well-schooled in how to rule, and would soon show the world around him that he meant business.

By the time he was 25, the man who would re-name himself Ch’in Shih Huang-Ti (First Emperor), had stamped out opposition in all the surrounding states, and linked their walls together to create one country, and the Great Wall of China.

Zheng accomplished a great deal in a very short time, through the strictest and most expedient way of ruling- his way or death. When a municipal worker was late to the job, his entire crew was executed. While bridging the gaps in what would become the Great Wall, he sent 500,000 conscripts to the North with one of his generals. The workers were driven so hard, on his orders, that their bodies served as foundations in the trench the wall was built upon.

Chinese scholars disapproved of his actions, to their own peril. On the advice of his prime minister, Zheng had all books, artwork and other records prior to his reign, burned, if they did not agree with his philosophies. Although copies were kept for posterity in the Imperial Library. But even those were lost in the upheaval that followed the Emperor’s death in 210B.C.

At least he did not take live soldiers to the grave. Instead, he took an army of 6,000 lifesize terra cotta soldiers, each one meticulously crafted and decorated with the costume and weapons of various regiments and positions. Although it is rumored that the workers who made the soldiers, and placed them in battle formation in the ground, were killed to prevent anyone revealing where they had been buried.