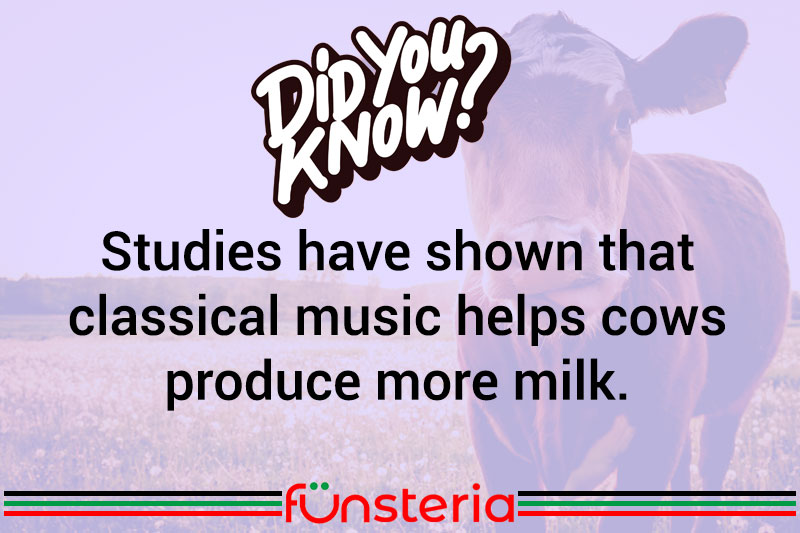 How do you train a cow to give more milk? Well, you might try a little Mozart. Because a recent study indicated that cows who were exposed to classical music for 12 hours a day, gave up to 1.5 pints of milk more than cows who were played more upbeat, lively or frenetic rhythms.

In 2003 a study was carried out by psychologists from the University of Leicester, UK, in which various types of music were played to herds of Freisian cows numbering up to 1,000, from 5a.m. to 5p.m. on a daily basis over nine weeks. The results showed an increase of 3% in overall milk production for such music as Beethoven’s “Pastorale”, and surprisingly, Simon and Garfunkel’s “Bridge Over Troubled Water”.

Scientists chalked up the results to the well-known phenomenon which has been previously shown effective in humans, and even dogs- that the playing of “soothing” sounds or music reduces stress, and induces relaxation.

Why does it work? Nobody really knows, but current theories center around the concept of entrainment, where two oscillating bodies, or two rhythmic cycles end up being in synch due to their proximity, and the influence of one on the other. In plain English, some part of the rhythm of the music is pulsing on the same frequency as the cow’s delta brain waves, inducing a state of relaxation in which more milk is manufactured, so to speak.