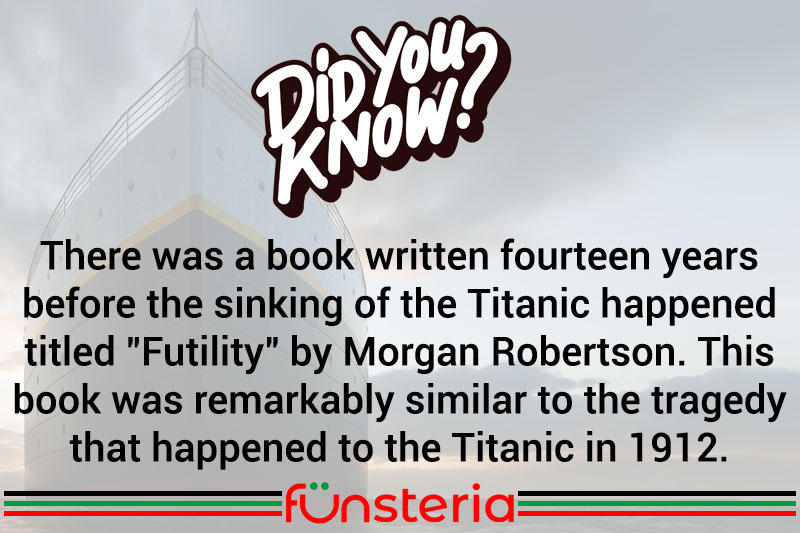 Whenever there is a tragic event, there are soothsayers and other psychic individuals who rush forward with their tales of how the birds in their backyard hung upside down from the clothesline by one leg, and forecast the disaster. But there is usually no real proof to back up their claims.

This wasn’t the case, with the sinking of the Titanic in 1912. Fourteen years before the ship went down, Morgan Robertson published a book called Futility, in which a ship called the Titan, sank. The great ship had been built with 19 water-tight compartments and was capable of staying afloat, even if nine of them were full of water. Because of the latest technology that went into her creation, and made it so superior, the Titan carried only the minimum number of lifeboats required: 24, with places for 500 of her 3,000 passengers.

Eventually, in his book, the Titan struck an iceberg on the starboard side, while in the North Atlantic on her maiden voyage. The month was April. Only 13 people survived.

In 1912, perhaps capitalizing on the bizarre event forecast in his story, Robertson had his book reprinted under the title Wreck of the Titan. In it, the outstanding similarities remained the same as the 1898 version. He did change a few “minor” details, which in no way altered the outcome, or the potential for disaster. He increased the weight to slightly more than the real Titanic, and upped the horsepower to 50% more than the real ship. What he was trying to prove with those alterations, nobody knows.

Robertson himself, was the son of a Great Lakes ship captain. He would run away as a teenager, to join the Merchant Marine, rising to the rank of First Mate, before leaving the sea. He died in March of 1915, in Atlantic City, where his body was found in front of an open window, overlooking the ocean.