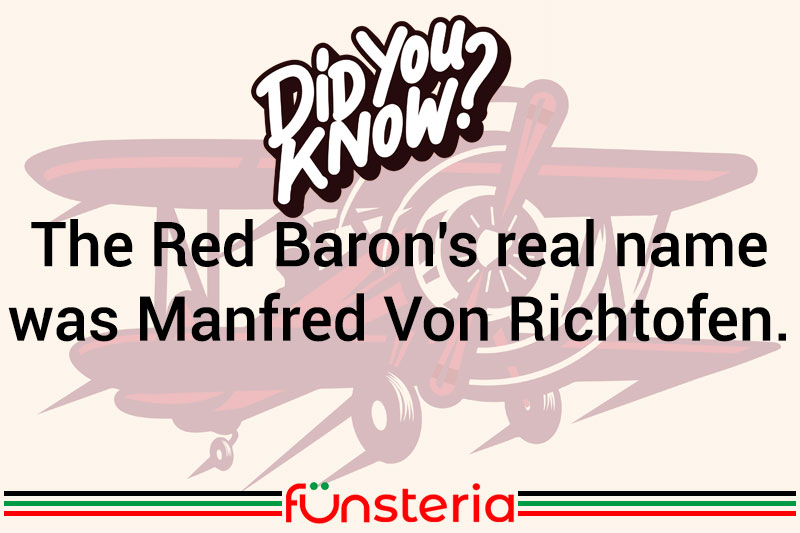 As most Snoopy fans know, there really was a WWI hero named The Red Baron, but only as a nickname. The real person was Manfred von Richtofen, born 1892. As a young man, he excelled in sports like horsemanship and became very fond of the awards he won. During his service in WWI, von Richtofen became the greatest flying ace on either side, being credited with bringing down 80 planes, for which he rewarded himself with a silver cup to mark each occasion. The Red Baron was also credited through his airborne maneuvers, with the deaths or capture of 127 members of the Allied forces.

He was the most decorated pilot ever, with 24 medals for his flying prowess, and while not invincible, he did leave many people wondering what happened the day he died April 21, 1918.

Many military and medical theorists lay the blame for his death back on Richtofen himself, who had suffered a bullet wound to the head, barely a year before. The severe concussion was thought to have left him with some functional and cognitive impairment that he did not reveal to doctors. However, even his mother noticed a change in both his mood and attitude, just three months before his death, when she got the impression, expressed in her memoirs, that his thirst for the kills, and his mental alertness were dulled if not gone.

The Red Baron was technically killed by a bullet that entered his body from behind and below the right shoulder, exiting up and to the left of his left nipple. Everyone seemed to want to claim the “honor” of having downed the Red Baron, whose plane after that almost instant death, managed to crash land without being destroyed.

Credit most often goes to RAF Captain Roy Brown, who reported diving on a pure red biplane that was firing on another pilot. The plane flew on a short way then dove to the ground. Von Richtofen’s plane was the only one in his squadron allowed to be completely red, which had become his trademark. However, other of his comrades’ planes were also largely red, with a second color added. But this similarity may account for the confused accounts of who fired on which plane.

Brown’s account does not tally with the angle and entry point of the fatal bullet, let alone the fact that the plane continued on when the Red Baron was dead. Nor do the accounts of Allied ground troops who claim to have fired at the plane, head-on. Other rumors implied that troops leaped out of their foxholes and shot the Baron as he sat in his wrecked plane.

Regardless of who brought him down, the Red Baron was buried with full military honors from both sides, in a cemetery near Amiens, France.