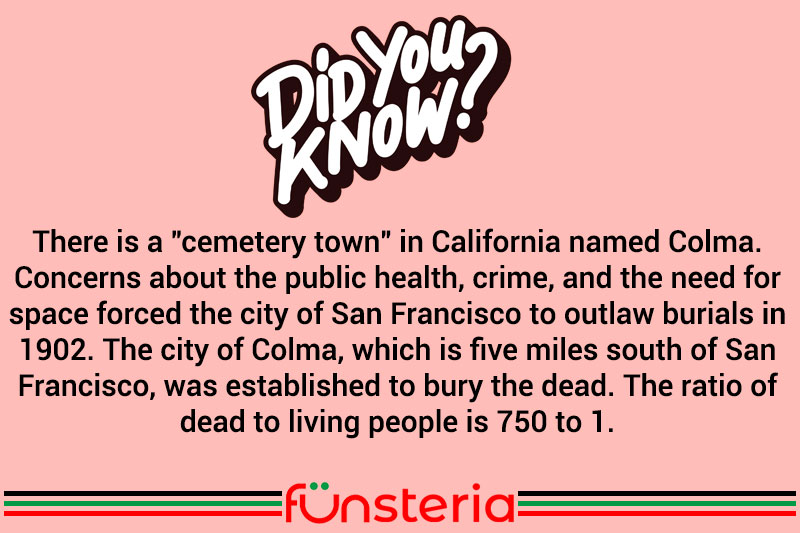 When the nation was young, and the land unsettled, people were pretty much buried where they died, whether it was in a city, along the trail, or on the family homestead. But all that changed in California, in the late 1800s.

The Gold Rush, along with other prosperous opportunities had brought an influx of people to the state, and along with them came diseases and disorder. Burial where you dropped became so commonplace, that California passed a penal code law in the latter part of the century, forbidding burial anywhere except in a duly allotted cemetery established by a religion, city, county, ethnic group, or the military. Before long, the centers that were settled, found themselves running out of burial space.

Enter the town of Colma, soon to become “the city of the dead”. Cemetery owners were unable to purchase any land to expand their lots in San Francisco, because the value of real estate was too high, and a better price could be had from the living, than the dead. When the city passed a law March 26, 1900, forbidding further burials within their limits, Colma seemed like an ideal solution.

Geographically speaking, its borders ran right along that of San Francisco County. It was possible for people to travel from ‘Frisco to even the southernmost point of Colma, and return in a day. Being that handy, dozens of city cemeteries then purchased land in Colma for their “clients”. The city grew, but most of the residents were six feet under.

Meanwhile, back in San Francisco, the abandoned cemeteries became the target of vandals, and eventually they were declared health and safety hazards. In 1912, the city did the unthinkable- they issued eviction notices to all the cemeteries.

The battle over burials went on for 25 years, until finally in 1937, any bodies that hadn’t been moved, were removed by the city. And they all went to Colma. Hundreds of thousands of dead people were re-interred in extensions of city cemeteries and in new ones that grew up on the spot.