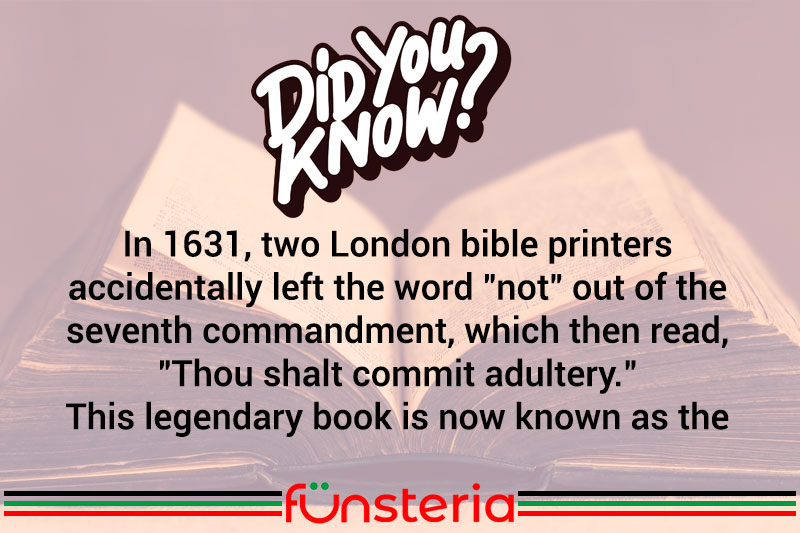 The book that has enjoyed more sales over the centuries than any other, is of course, the “Good Book” or the Bible. In an era when literacy was not widely spread, printing of the Bible took precedence over many other kinds of books or materials. But in the 1600s, it was still a relatively new “art”, and their proofreaders were not all that literate themselves. In the 1630s, King Charles I ordered 1,000 copies of the King James Version from an English printer by the name of Robert Barker. They were duly delivered and had begun distribution when someone noticed a teensy error in Exodus 20:14, where it appeared that people were now being directed “Thou shall commit adultery”, the “not” having been left out. In a rage, Charles recalled all the copies, fined Barker 300 pounds, the equivalent of a lifetime of earnings, and Barker went broke. This quirky edition went on to become known as the Wicked Bible, which did not amuse King Charles in the least. Today, there are only some 11 copies left in existence.

Other notable errors include an 1806 version known as the “standing fishes” Bible for this misprint in Ezekiel 47:10 which turned fishers into fishes: “And it shall come to pass that the fishes shall stand upon it from Engedi, even unto…” And this prize, the 1801 “murderer’s” Bible, which morphs Jude 16 into: “These are murderers, complainers, walking after their own lusts…” The word should have been “murmurers”.