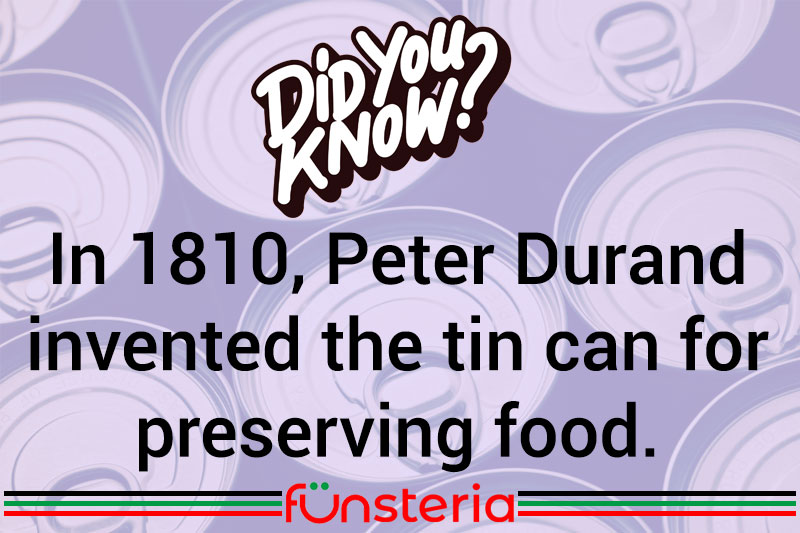 Preserving food for any length of time in the late 1700s, was something of a problem. Especially when it came to wars and long marches for thousands of soldiers. So it came about that in 1795, a body known as the French Directory offered a prize of 12,000 pounds to anyone who could invent a way to preserve foods to be eaten later.

Nicholas Appert, candmaker, vintner, pickle maker and jack-of-all-trades, answered the call. If you could seal wine in bottles, why not food? He would spend the next 15 years testing scrapping and re-testing how to seal food in bottles with cork stoppers. Eventually, he arrived at the conclusion that food partially cooked, sealed in a bottle from which air was withdrawn, and then the bottle heated, would deliver a safe, and palatable product.

The final test was sending his goods on a four-month sea voyage where 18 different kinds of food were found to be as good at the end of the trip, as when they were “jarred”. Napoleon himself awarded the prize.

Not to be outdone, England flung down the same gauntlet. Peter Durand seized up on the theory, if not the material, and made his packing vessels out of tin plate, that were then iron coated with tin to prevent rusting. King George III granted him a patent, which Durand leased out to others who did the actual work. Tin was lighter, easier to carry, and didn’t break like glass. It would soon be the boon of armies, and Artic expeditions who were seeking the Northwest Passage. Although ultimately, it is thought to have been at least partially responsible for the deaths and loss of the Franklin Expedition in 1847.

The first remains of the expedition were found in three frozen graves in the early 1850s. Those same graves would be opened 130 years later and the bodies subjected to thorough post mortems, which showed they all had extremely high levels of lead in their bodies, from improperly sealed cans. The lead content would have lead to sickness, madness and death.

Other evidence showing that the ships had become trapped in ice and abandoned, causing many of the crew to starve or freeze, may have been a result of a crew now incapable of running the vessels. But nobody will ever know for sure.