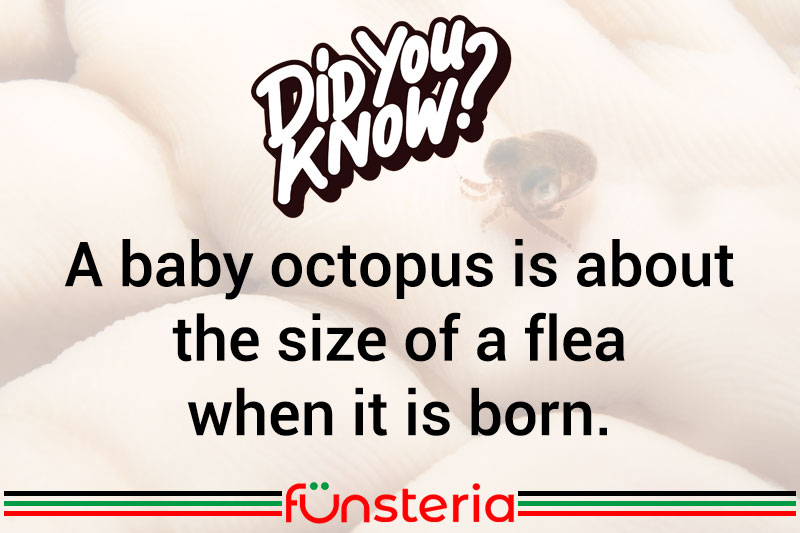 If you’ve ever wondered why the octopus has eight legs, it might be because the mothers need them when they go into a dark cave, and lay up to 100,000 eggs. Each egg has a string attached, and she links them together and hangs the entire bunch from the ceiling, standing guard over them until they hatch in approximately 50 days. At that time, the “kids” may very well become motherless, as many females die of starvation before the hatchlings emerge.

Depending on the species, an adult octopus can be as small as one inch, like the male Walnut Octopus, whose mate grows up to 6.5 feet long. Or, they can be as large as the Giant Pacific Octopus, which has been known to weigh 270 kg. with a spread of 23 feet from arm tip to arm tip.

One of their more interesting defense mechanisms is the ability to shoot ink out of its body when threatened. Depending on the predator and their eyesight, this can serve to disguise the octopus’ scent, provide a screen behind which they escape, or form tendrils in the water, which mimic the octopus’s limbs and cause the attacker to mistake the ink for the real thing.

Then there is their talent for changing color, either as camouflage or because they are distressed. Like other cephalopods, the octopus has pigment cells called chromatophores, each of which holds three colors. Blended in various ways, according to whatever trigger activates their nervous system, they can change from one color to another, in seconds.

Oddly enough, with all its other unique features, the octopus is the first one to falter when it comes to “armed” combat, even if they do have eight of them. That’s because the oxygen-carrying component of their blood, called hemocyanin, is copper-based, and less efficient at carrying oxygen through their systems, than the iron-based hemoglobin that humans have. Consequently, oxygen used up, the octopus tires easily in a struggle.