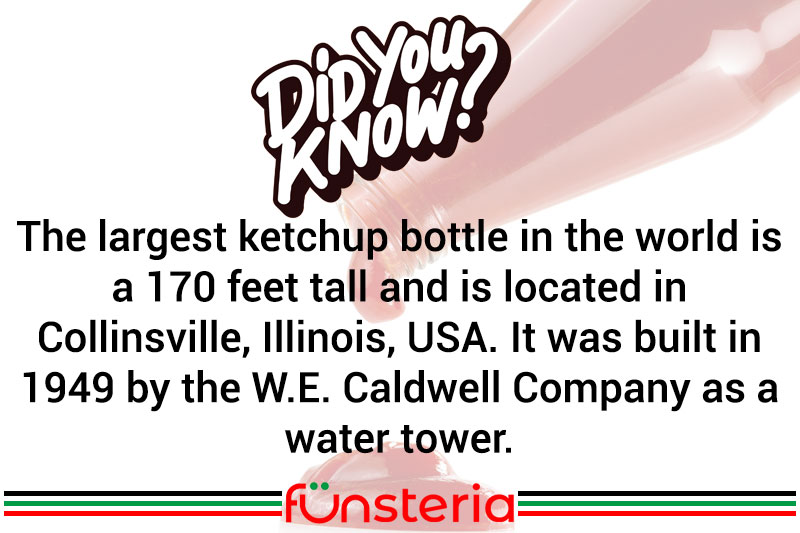 It would take a really big plate of fries, to empty the famous world’s largest ketchup bottle in Collinsville, Illinois. In fact, experts calculate that it could hold enough catsup for 25 million hamburgers. The bottle, actually a water tower, stands 170 feet high, a monument to America’s favorite tomato sauce. The bottle/tower is one of the first and longest surviving examples of roadside art, in the country.

In 1891, a Collinsville businessman started up a cannery, among whose products was catsup. The company was bought out in 1908 by the Brooks brothers, and renamed. One of their chief products was the rich, tangy Brooks catsup. And while the company would change hands twice more, the name of the catsup endured. In 1949, when a new water tower was needed to supply the plant, as well as the fire sprinkler system, president Gerhardt S. Suppiger made the whimsical suggestion that it be built in the shape of one of their tapered catsup bottles.

The W.E. Caldwell Company, of Louisville, Kentucky, was awarded a contract in 1947, to build the riveted steel 100,000 gallon water tower, which would then relieve the strain on local water reserves, much to the delight of Collinsville residents. The final cost was $23,926.40.

The water tower was repainted its distinctive color in 1954, by the Pittsburgh Tank Company of Pittsburgh, Kansas. It was a “golden” era for the red sauce, with six, 12 oz. bottles of Brooks tangy catsup selling for $1.00 in 1959.

Actual bottling of catsup at the plant ceased in 1963, but the tower was maintained and repainted. The Brooks name had survived many years and changes, but the logo changed, and in 1970, the new one was painted on the bottle/tower.

With the move away from manufacturing in the plant, the tower fell into disrepair in the 1980s, and became a target of graffiti artists, every time it was painted.

Local residents who undertook a “save our bottle” campaign in 1993, were horrified to find out the parent company wanted nothing to do with the bottle or preserving it. Fond memories and opened wallets not only kept the bottle upright, and with a fresh new coat of paint, but in 2002 it was named to the national register of historic places.