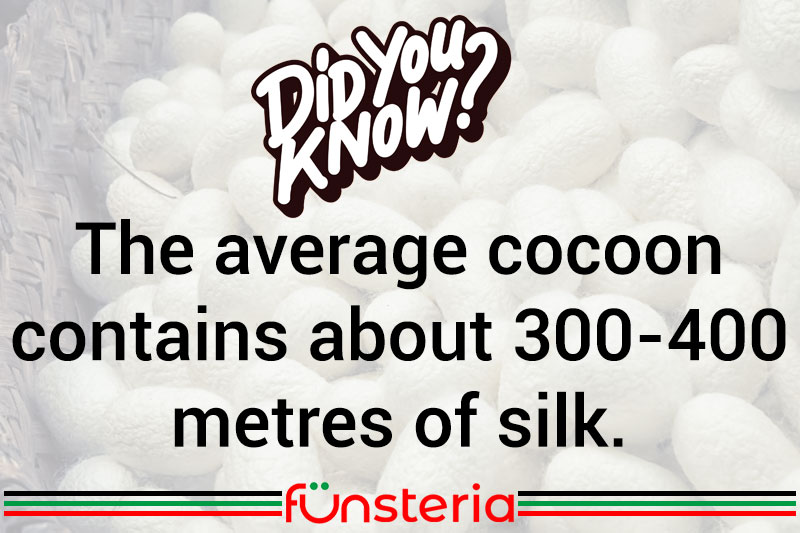 If there is a single fabric that says luxury, decadence, and elegance no matter what it has been used for, it has to be silk.

The classical elegance of the end product put out by a worm, of all things, has been around for nearly 5,000 years. Yuen Fei, concubine of a Chinese emperor who ruled in 4600 B.C. is credited with the discovery of silk’s secret, when she dropped a cocoon into a hot cup of tea, and it unraveled.

And it would have filled her cup with some very fine filaments, since each cocoon is comprised of approximately 300-400 meters of silk threads. While that sounds like a lot, it’s nothing at all, when you consider that it takes 5500 silkworms to produce enough thread for a kilogram (2.2 lbs.) of raw silk.

Fortunately, silkworms are prodigious reproducers, and one ounce of silkworm eggs can yield 20,000 larvae, who in their lifetime will consume a ton of mulberry leaves, the main diet of silkworms.

Simply one of the most beautiful fabrics in the world, there is actually more than one kind of silk. The highest quality silk is spun by the Bombyx Mori silk moth, which is the one that favors mulberry leaves. But there is also Tusah silk, produced by worms that feed on oak leaves. And in a rare display of cooperation that produces a double strength thread, silk dupioni is made by two worms in the same cocoon.