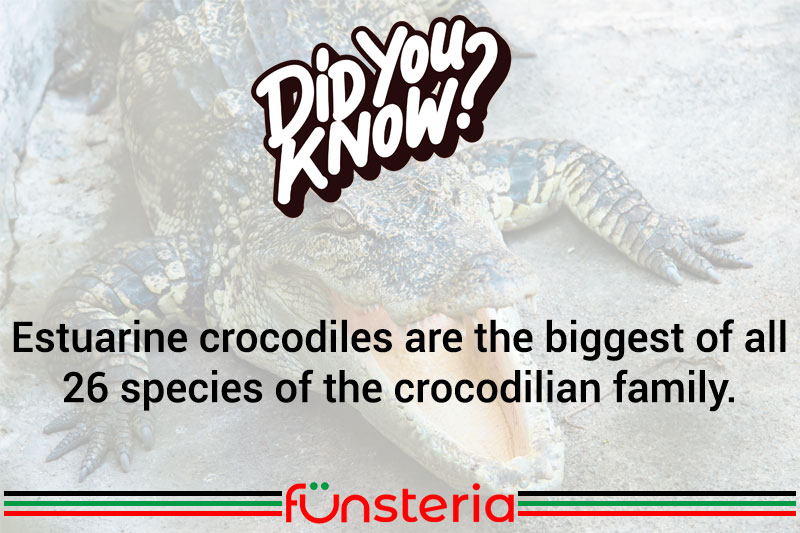 They lurked in the same primordial swamps from which many of the ancestors of today’s animals first crawled out, only to die in the great Ice Age, or whatever it was that knocked off the dinosaur population. “They”, are crocodiles, reptiles that have slithered in and out of the waters in both American continents, China, Africa, New Guinea, Australia, Madagascar and Pakistan, for the last 200 million years. And they’re the largest reptiles on Earth.

How big are they? That depends on which of the approximately two dozen existing species that a “croc” belongs to. The largest acknowledged crocodile is the Estuarian, or saltwater croc, averaging 12-14 feet. But that’s not as big as they can grow.

Researchers have determined that both genetics and environment can play a part in how big a problem a crocodile can become. There are some captive examples that are whoppers unlikely to be seen in the wild again, due to the over-hunting by man. These large size lizards reach great lengths due to having optimal conditions in their environment, and a ready supply of food.

Gomek, a long-time resident of the St. Augustine Alligator Farm in Florida, was 17.9 feet long at his death in 1997, when he was estimated to be 70-80 years old. Burt, who resides in Darwin, Australia, is a mere 16 feet long.

The acknowledged king of crocs, is Yai, listed in the Guinness World Book of Records at 19 feet, 8 inches, and weighing 2480 pounds. His enormous size is all the more amazing for his age, which is estimated at only 30 years. But he has an edge over your run of the mill pond predator, being a hybrid of the Estuarian and another species of crocodile.