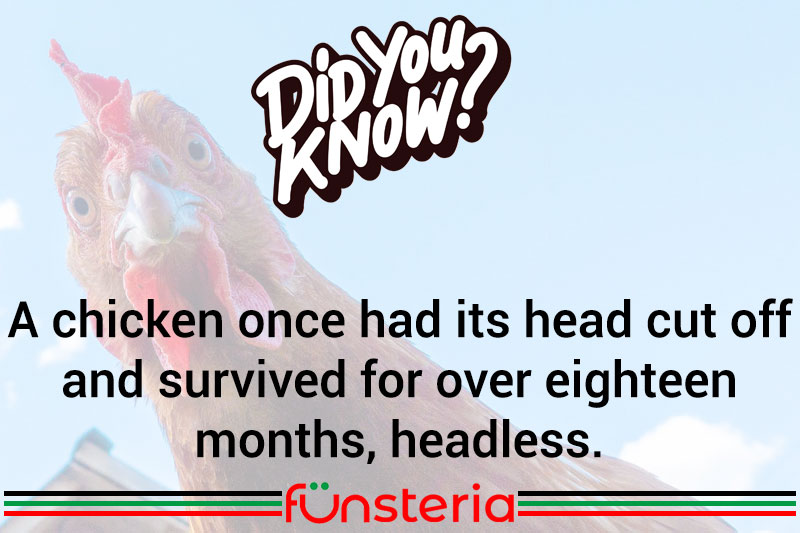 Have you ever felt you were running around aimlessly, like a chicken with its head cut off? Well, in Fruita, Colorado, you can do that every year at the annual festival that honors Mike, the headless chicken!

Believe it or not, and many people don’t, a Colorado farmer attempting to dispatch a chicken for dinner in 1945, ended up with one of the biggest non-hoaxes of the era, and a place in the Guinness World Book of Records for the headless chicken who survived the longest.

Lloyd Olsen had been sent out to the yard, to sacrifice a plump young rooster of about six months. And guess who was coming to dinner to eat it? His mother-in-law. Knowing how she favored the neck, Olsen went about his task with the idea of keeping on the mother in law’s good side, by keeping most of the neck on the chicken. He succeeded in a way he’d never have expected in his wildest dreams.

When the chicken (who later became known as Mike, although nobody remembers why) was decapitated, he refused to lay down and die. While many birds slaughtered this way will appear to run around for a few seconds, it’s actually a nerve/adrenalin response by the body, with no actual intent to escape. They drop down, and die. But not Mike.

He continued to run around the chicken pen. Olsen let him be, and the next morning, found Mike asleep with his “head” under his wing. Figuring that any bird who wanted to live that bad, was worth the work, he began feeding grain and water directly into the gullet through an eye dropper. When Mike was still alive a week later, Olsen packed him up, and drove him to the University of Utah, to explain the phenomenon.

Apparently the axe had severed the head above the brain stem, missing the jugular vein and leaving the entire brain, and one ear. A large clot had stayed any major bleeding, and the wound healed over, leaving the gullet open for feeding.

Not only did Mike live for another 18 months, but he grew to a creditable eight pounds, and became a national news story as well as a sideshow attraction. Mike went to that great chicken coop in the sky during a road trip in Arizona, when he began to choke in the middle of the night, and Olsen was unable to find the eyedropper with which they kept his throat cleared.