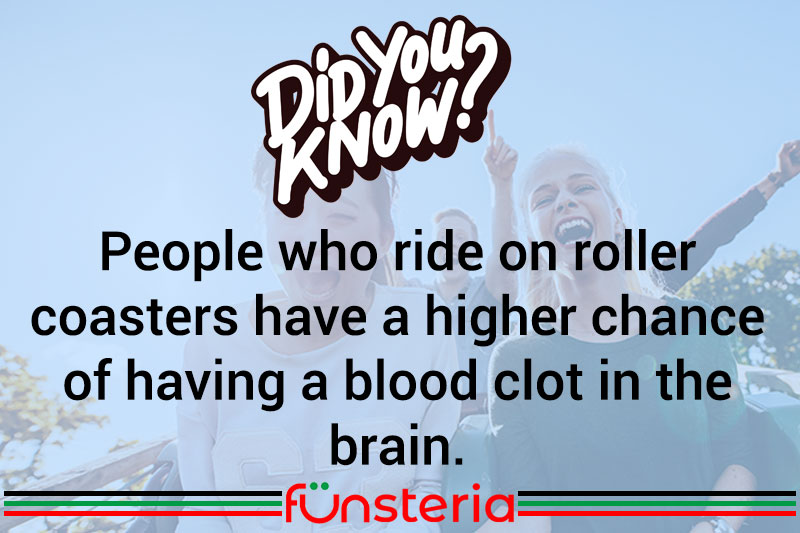 If life’s ups and downs are getting to you, take yourself off to the fairgrounds and hark back to the young and carefree days, when you were brave enough to ride the roller coasters. Or if the idea has already given you vertigo, try some of this trivia:

The tallest roller coaster in America is also the fastest. Superman the Escape, at Six Flags Magic Mountain in Valencia, California is 415′ high, and reaches speeds of 100 mph. But Cedar Point in Sandusky, Ohio offers you quantity: 13 roller coasters in the same park.

The “loops” on roller coaster rides, are actually called klothoids, a shape that has a varying radius of curvature, which is wider at the bottom, than the top.

Coney Island, New York was home to one of the earliest and most famous roller coasters. The ride, which opened in 1927, was called “The Cyclone”. It became so famous, it spawned dozens of imitators, and almost eighty years later, “Cyclone” is still the most popular name for a roller coaster.

The oldest roller coaster in the world, is called Leap-The-Dips, and it was built in 1902. The famous ride, which still runs in Lakemont Park, Pennsylvania, is the last existing side-friction, figure eight roller coaster. Stretched out, it would be 1452′ long, is 41′ at its highest point, a maximum dip of 9′, and a speed of 10mph.

Those who enjoy the “big ride” should be warned, that health researchers have recorded a number of cases of blood clots on the brain, from riding roller coasters. While there is no specific evidence, they suggest that the subdural haematomas, or bleeding on the surface of the brain, are caused by either the back and forth motion, or the acceleration force that comes into play when the coaster goes down an incline.