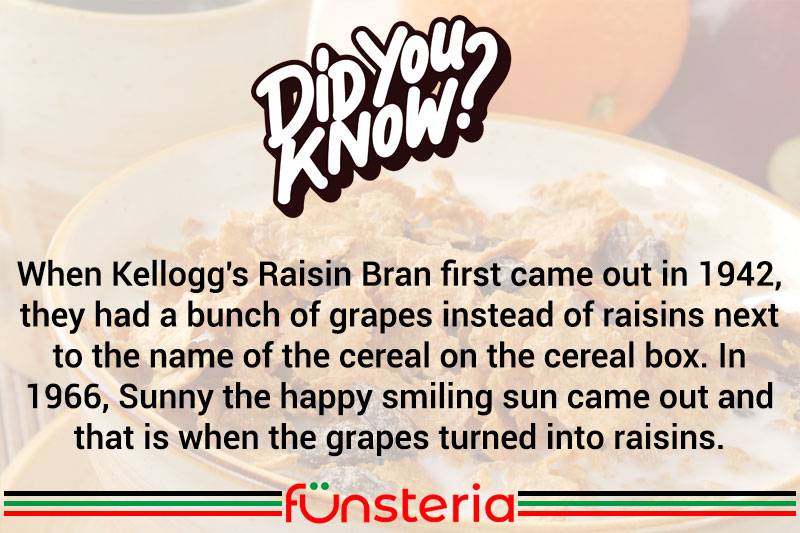 And the next day, and the next, and the next. That’s if your family are fans of Kellogg’s famed Raisin Bran cereal, a mixture of crunchy flakes and “sun-dried” raisins.

When it debuted in 1942, the cereal packaging was fairly simplistic. It featured a bunch of grapes next to the name of the new breakfast cereal. That made sense, because raisins in a pile weren’t very…well, attractive.

But as time rolled on, and television became such a major part of marketing, Kellogg’s had to turn to other devices to attract attention to their products. For Raisin Bran, that meant employing the cartoon characters Jinx (a cat) as well as Pixie and Dixie (who were mice), to liven up their ads, with music and a variety of “mod” costumes. That lasted from 1963-1966.

Then a new sun dawned on the horizon. He’s called Sunny(tm) and he’s a trademark entity of the Kellogg’s company. His bright, smiling face (not to mention his heat), dried up those grapes and from then on, the packages showed raisins on the front.

Sunny(tm) went on to quite a career in show biz, singing solos, duets with other characters, and getting a makeover so that he literally got a larger part of the packaging and attention. Although retired from the entertainment world now, he still beams over those two scoops of raisins pictured on every box.