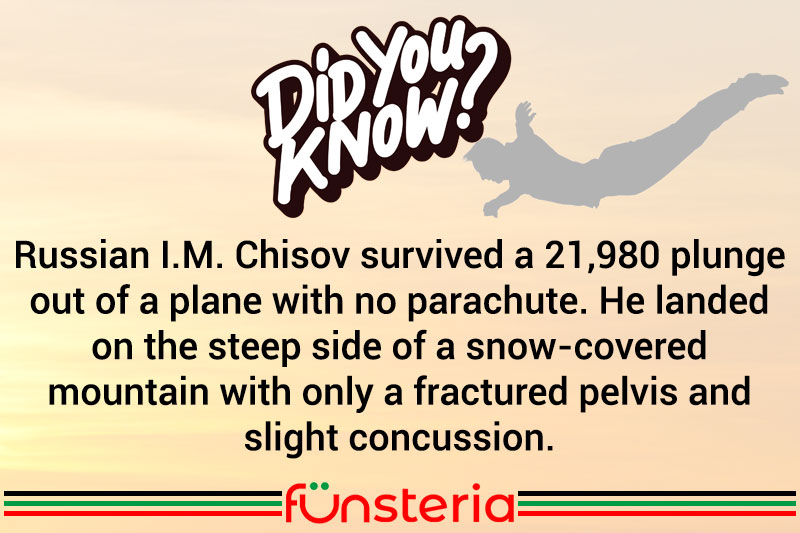 Ever since parachutes were invented there have been parachute accidents. Then there were the adventurers who chose to “free fall”, or drop from the airplane for a considerable portion of the distance to the ground before opening their chutes. Some incredible combinations of accident and chance have added up to amazing survival stories.

Lieutenant I. M. Chisov, then a member of the Russian Army, bailed out of his Ilyushin 4 plane in January 1942, when it was attacked by a group of German Messerschmitts. His plane was at approximately 22,000 feet at the time. Chisov planned to free fall and then open his chute at around 1,000 feet, to avoid being seen by the enemy. But the rapid descent in the cold caused him to pass out. When he reached the ground, Chisov’s body bounced off the edge of a ravine layered in three feet of snow, and then rolled to the bottom. He regained consciousness with a concussion, fractured pelvis, and a closed parachute.

Chisov was not the only wartime ace to land the hard way. Alan Magee, serving as a gunner in the 303rd Bomber Group of the 8th Air Force, was thrown from his B14, which had been set afire by enemy bullets over Nazaire, France. He never had the chance to don his parachute, and fell 20,000 feet to the ground, through the skylight of the local train station, with only a badly injured arm to show for it.

Another British soldier, Nicholas Alkemade, was also serving as a gunner in a British Lancaster bomber that was about to go down in flames in March of 1944. Looking over his shoulder, Alkemade realized his parachute was on fire, and rather than die in the flames, he jumped to his death. Only he didn’t die. The soldier fell through trees, underbrush and snowdrifts, coming out of it with a twisted knee and some cuts.