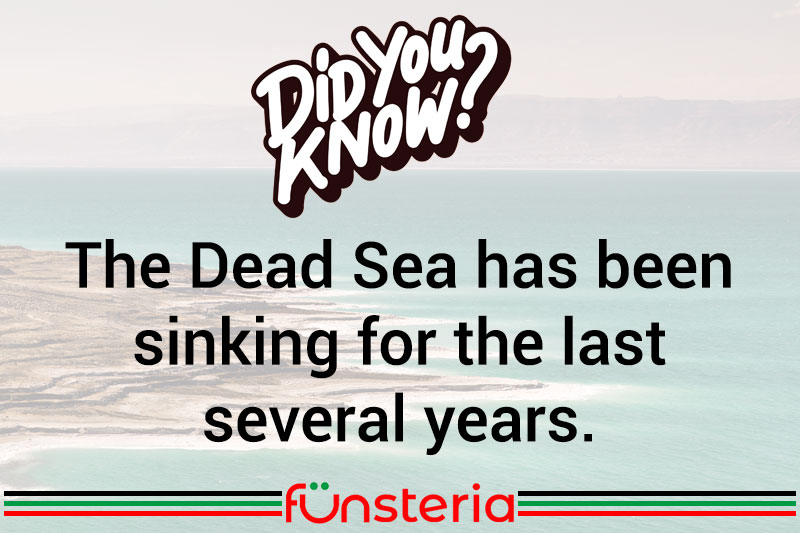 Cities, countries, rivers and even mountains get named for lots of things, most of which you can figure out on your own. But when it comes to the Dead Sea, one has to wonder who died to give it the moniker. The answer is – everything.

The Dead Sea has such a concentrated salinity, that nothing which breathes, swims, wiggles, or basically is recognizable as a life-form, can exist in its waters. The fascinating part is that the Dead Sea is completely landlocked, and nowhere near the Ocean, which can’t hold a shaker to the salt content found here.

Millions of years ago, in this location between Jordan and Israel, the Earth began forming tectonic plates that covered its molten core. You’d think once the outside cooled and hardened, the whole thing would be pretty solid. Not so. Underneath the Dead Sea, the surface of the Earth is becoming thinner by the year, because of a rift that is causing the plates there to separate. As a result, the seabed drops with the movement. Over the millennia, a depression formed that became filled by freshwater rivers that run into it. But there are no waterways that lead out.

Consequently, all of the mineral salts that are picked up in the mountains are carried down to the Dead Sea. And with no outlets, the salts remain there, only to show themselves as water evaporates, particularly around the shoresm which are coated white with it.

The water down to approximately 130 feet, contains 300 grams of salt for every kilogram of water, and past that, a whopping 332 grams. So heavy is the salt content, that it actually manifests itself as residue on the bottom, because the water can’t hold any more. The water itself is so dense, that although there is no marine life, there is plenty of human life that enjoy the fun of bobbing because the salt allows them to float without effort.