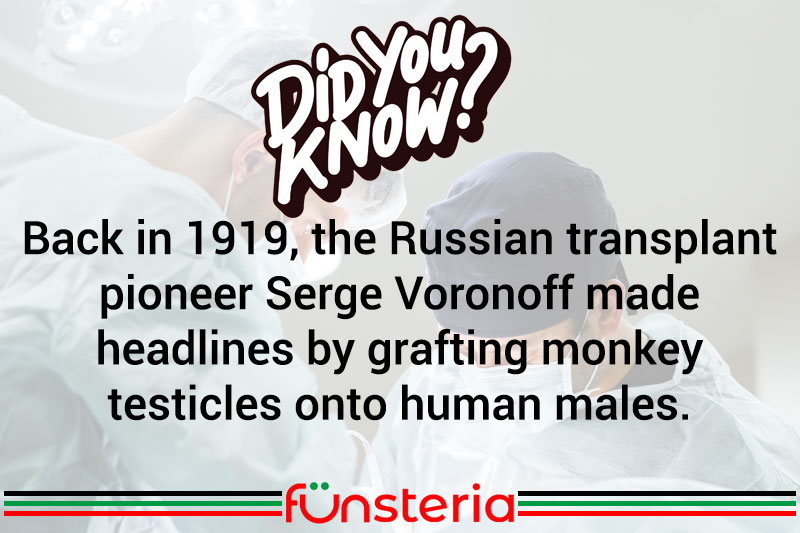 Because it is becoming so frequent now, many people take the transplant of human tissue for granted, as one of the wonders of modern technology. But strictly speaking, they are not all that new.

Samhita, by Indian author Sushruta, notes that re-building of earlobes and noses was accomplished by using skin from the cheeks. However, the work dates back to the first century or before, and there is no supporting documents to prove the efforts were successful.

There are also recorded cases of bone grafts in the late 1600s, and the first semi-modern skin grafts from a cadaver in the late 1800s. It would be 1906 however, before the first modern, and scientifically documented instance of corneal transplants took place in Moravia.

After that, transplants remained in limbo, partly because the fine sutures and needles required, were not developed until after the Second World War. But that did not stop some people from trying new things.

Russian born doctor Serge Voronoff, who became a naturalized French citizen, spent some time in Egypt around 1910, where he became fascinated by the eunuchs, men who had been castrated, and who exhibited underdevelopment or absence of certain normal physiological features of other men. He also became convinced that the aging process resulted from a slow-down of the endocrine glands, and production of sex-related hormones. His solution? To transplant monkey testicles into male humans.

Having already entered the field of organ/hormone transplant by implanting chimpanzee thyroids into people suffering deficiencies, and also by doing animal-to-animal transplants of testicles, Voronoff forged ahead, performing nearly 500 monkey to human testicle transplants by the mid 1930s. Convinced he was on the right track, he then turned to curing the hormonal problems of menopause in women, by giving them monkey ovaries.

The results of his studies, always in doubt, were tainted further by the deaths of several women, and he ceased his experiments under pressure from the scientific community who had never been quite convinced what he was doing was either ethical, or effective.