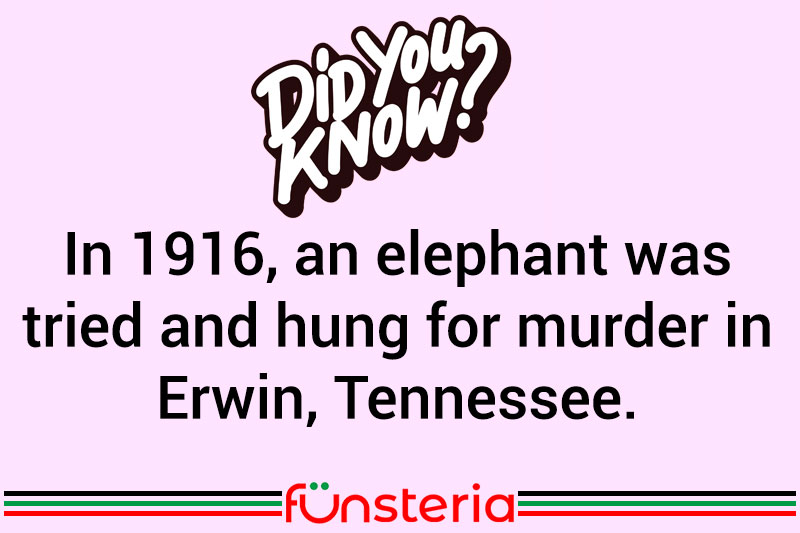 1916 was an era of uncertain times. World War I was raging, “disposable” income was pretty thin, and entertainments such as circuses, had to have a real draw, to survive. For Charlie Sparks, that was his much-touted elephant, Mary.

Sparks was a bitter man. His traveling show filled only ten measly railway cars, not the 42 it took to move John Robinson’s Four Ring Circus, his biggest competitor. And Robinson had a dozen elephants to Sparks’ five. But Sparks had Mary.

Charlie Sparks flogged his circus as honest, and delivering the goods. Then of course, he inflated Mary’s credits/accomplishments to outlandish measures. She was reportedly three inches bigger than P.T. Barnum’s Jumbo. The talented pachyderm could play 25 tunes on horns without missing a note. Her batting average in a baseball routine was a solid .400. But…she was temperamental. She had killed somewhere between 2 and 18 men. The number depended on how reluctant a crowd was to buy tickets.

In September of 1916, Mary made that claim to fame come true, at least once. She killed Red Eldridge, a drifter who had been taken on at Kingsport, Tennessee as an elephant handler, a job he knew nothing about. The next day, while taking her to a nearby pond, Mary killed Eldridge.

Eyewitness accounts were of little use, since they varied from the possible to the improbable, except that the end result was the same: Mary had struck or grabbed the man with her trunk and he had been thrown to the ground and stepped on.

A blacksmith immediately shot the elephant five times with a 32-20, to no effect. The local Sheriff then had a go at shooting her as well, with as little result. Sparks’ was desperate. He knew his circus would never play the state again, if something wasn’t done. So the elephant had to pay. In the end, they hung Mary from a railroad car derrick. There was no extra charge for admission.