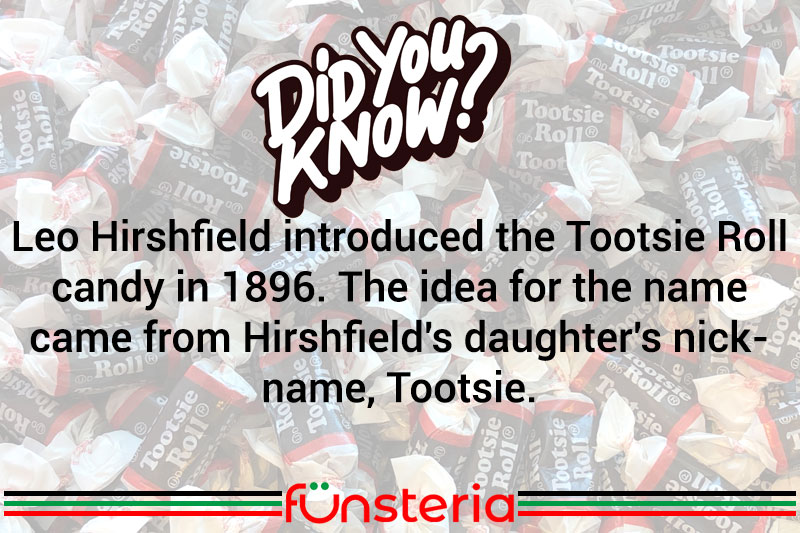 In 1896, Leo Hirshfield immigrated to America, carrying with him the secret recipe for sweet success. What he began making in his a little store in New York City, was the hard, chewy chocolate candy known far and wide as the Tootsie Roll, which took its name from Hirshfield’s nickname for his daughter, Tootsie.

One of the original “penny candies”, it became an instant hit, so much so, that Hirshfield had to move from his store to a four-story factory in 1905. By 1917, it had spawned the Sweets Company of America, and five years later would be listed on the New York stock exchange, all because of a chocolate roll.

But Hirshfield’s invention didn’t rest on its laurels. In 1931, the concept had spawned the Tootsie Pop, a lollipop that had a center of that chewy chocolate, and an outer, hard candy shell. Sales for both continued to soar despite the Depression and WWII, when servicemen were issued Tootsie Rolls as emergency rations, for their sugar content, and the fact that they were pretty durable, and took the rough treatment of troop movements.

In the post-war period, the company caught the new wave of television advertising, sponsoring several of the popular children’s shows, even as the business was expanding to other countries. By 1966, the company bowed to its leading product, and was renamed Tootsie Roll Industries Inc.

Today, TRI has absorbed a number of other well-known American candy makers and produces more than the popular chocolate treats. But those are still high on its priorities, with the plants churning out some 60 million Tootsie Rolls a day, and 20 million Tootsie Pops.