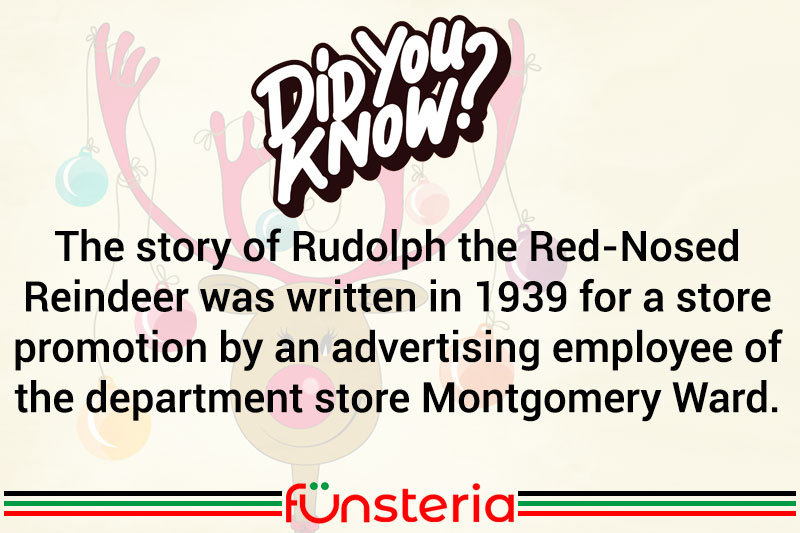 Rudolph the Red-Nosed Reindeer is so firmly entrenched in our holiday culture, that it seems like he’s been around forever, but in truth, the shiny snout is a mere 65 years old.

In 1939, the Montgomery Ward department stores were looking for an alternative to buying the coloring books that they gave out each year at Christmas. So they tapped employee Robert Mays, a creative soul who liked to scribble children’s stories, to write something up for them.

Drawing on his own background as a shy child, and combining that with an Ugly Duckling type theme, he decided to create a character that was different, and had some kind of abnormality. He ended up choosing a reindeer with a red nose, and while looking for a little alliteration in the name, rejected Rollo and Reginald, in favor of Rudolph.

Mays penned the story in rhyming couplets, with the help of his four-year old daughter for a critic.

So wildly popular was the book, that the store gave away 2.4 million copies that first year. The approaching war cut back on paper availability, but they still managed to distribute 6 million copies by 1946. For which Mays received not one cent. Because it had been written for the store, on his employer’s time, the rights belonged to Montgomery Ward.

Post-war demand for all things Rudolph was so great, that Robert Mays approached the president of Montgomery Ward for the copyright. He was still laboring under the debts that accrued with his wife’s terminal illness. (She died about the time that Rudolph was first printed.) It was turned over to him in January of 1947.

From then on, Robert Mays lived a fairly comfortable life, thanks to the polished proboscis of his reindeer. His brother-in-law Johnny Marks penned lyrics for a song in 1949, but many artists turned down the chance to record it. Gene Autry took the job, and the record sold 2 million copies that first year, and some 80 million to date, making it the second most popular single, after “White Christmas”.