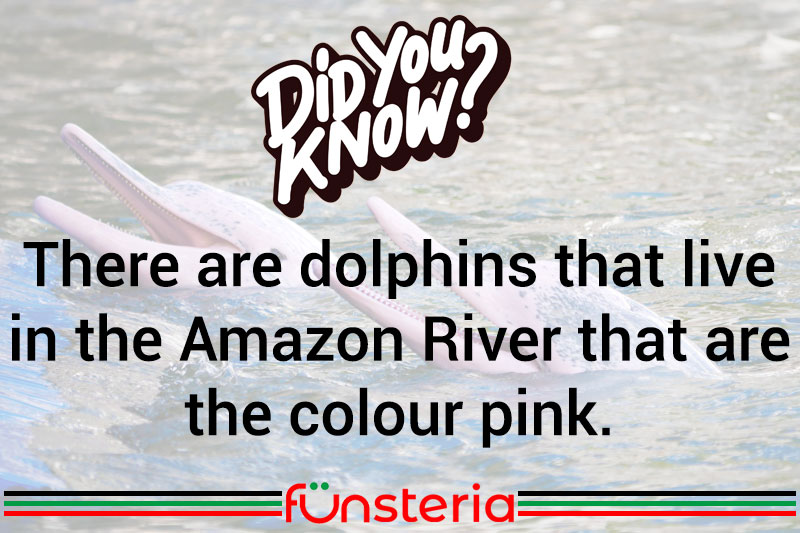 In at least two places in the world, one of the most intelligent mammals next to man is not the dull gray/blue of your everyday dolphin. These delightful and endangered species are both pink.

In and around Hong Kong harbor, there is a tiny population numbering just over 100, of Chinese White Dolphins who have had a “dye job”. This species of dolphin, which can be found from South Africa to Australia in its white form, is only pink in the Hong Kong location, and is said to be even pinker than their South American cousins. They live in the estuary saltwater of the Pearl River, fighting off the threats of sewage, chemicals, and over-fishing, to survive. Rather than a separate or sub-species of the Chinese White, these dolphins are thought to be an anomaly of nature.

In Brazil, the Amazon River dolphins are born gray and turn pinker with maturity. Unlike their pink Asian relatives, these are strictly freshwater dolphins, which will rest on the river bottom, and who come with a set of molars for chewing food, the only type of dolphin so equipped.

Why are dolphins pink? One theory set forth by scientists, who have few studies to go on due to the shrinking population, is that the color comes from consuming crabs and shellfish which have a red pigment to their muscle tissue. Over time, the pigment builds up in the skin, and the dolphin becomes pinker as they grow older.

In addition, dolphins red blood cell count and hemoglobin concentration in those cells, is higher than that in the human. This may be one explanation for the Brazilian dolphin’s unusual ability to flush a bright pink when excited.