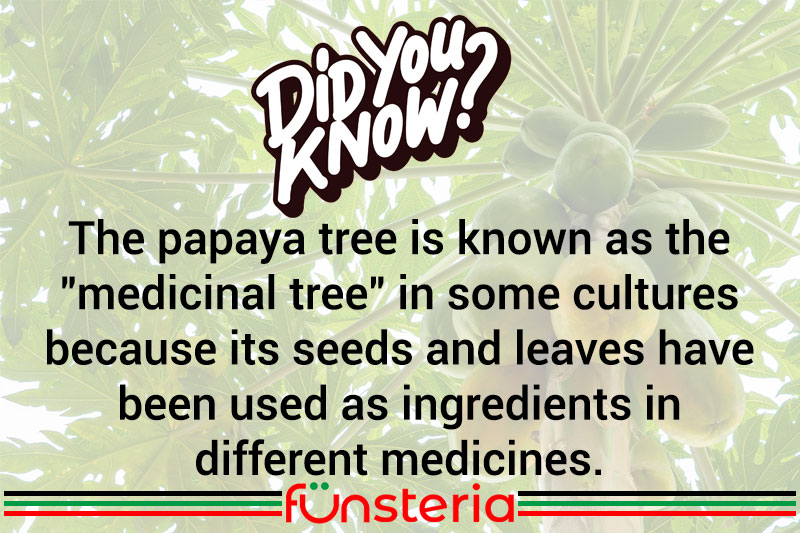 They’re shaped like a pear, but that’s where the resemblance ends, for the papaya weighs about a pound each, and can measure up to 18″ long, depending on the variety and growing conditions. Some Mexican specimens go a whopping ten pounds.

Originally a fruit of the tree that grew in Mexico and Central America, it is now cultivated throughout the world in semi-tropical regions, with primarily Hawaiian papayas making it to market in the U.S. for their sweeter flavor.

The green fruit grows on a tree that can be as tall as 18′, although the Hawaiian varieties are shorter, and easier to pick. As it grows, a spiral of leaves forms a canopy at the top under which the fruit emerges. As one crop drops or is picked the tree continues to grow and leaves drop off, so that the long trunk is scarred with the former resting places of fruit and leaves from previous crops.

When ripe, the papaya is a rich orange color in the flesh, with a yellow outer skin, and a cluster of black seeds in the center. Those seeds are often used ground up, in the same manner as pepper, and are even eaten as a snack.

Among the papaya’s many beneficial properties, is the fact that it’s the only fruit to produce papain, a digestive enzyme that resembles one produced by the pancreas. In fact, so valued was the fruit by ancient tribes, it is often referred to as the “medicine tree”.