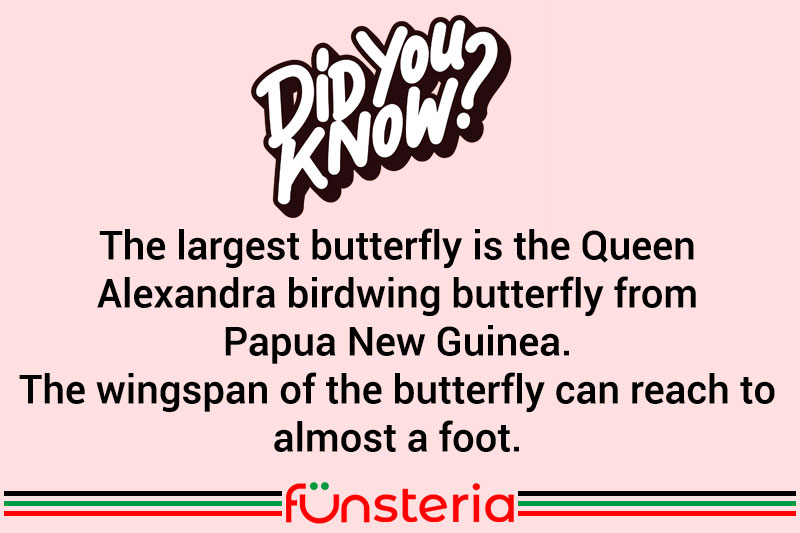 Technically you could almost say they waft aloft on the wings of a bird, because the Queen Alexandra’s butterfly is the largest member of the order Lepidoptera, in the world.

Discovered by Sir Alfred Meek in 1907, this beautiful denizen of Papua, New Guinea was named for her Royal Highness, Queen Alexandra, the Danish born wife of King Edward VII of England.

Today, the Queen Alexandra is considered an endangered species, as its rainforest habitat gives way to the encroachment of Man and the growing business of palm oil plantations. North American butterflies are impressive for their size and variety of patterns, but the Queen Alexandra is stunning for all of that, but mostly the size, up to an incredible one foot wingspan in the females, which are larger than the male.

Females have a cream colored body with a spot of red fur on the abdomen, and large brown wings with white markings. Unlike many species of animals and insects, the smaller male is also the more colorful of the two, with bright green and blue wings on a yellow body.

While the caterpillars start out eating their own eggshells, they soon graduate to nibbling the pipevine plant, from which they get the name “the poison butterfly”, for the plant itself is highly toxic. The amount consumed by the caterpillar however, will only make animals violently ill, and is seldom fatal. Still, the markings in conjunction with the effects of dining on them, is enough to make the Queen Alexandra safe from most prey except Man.