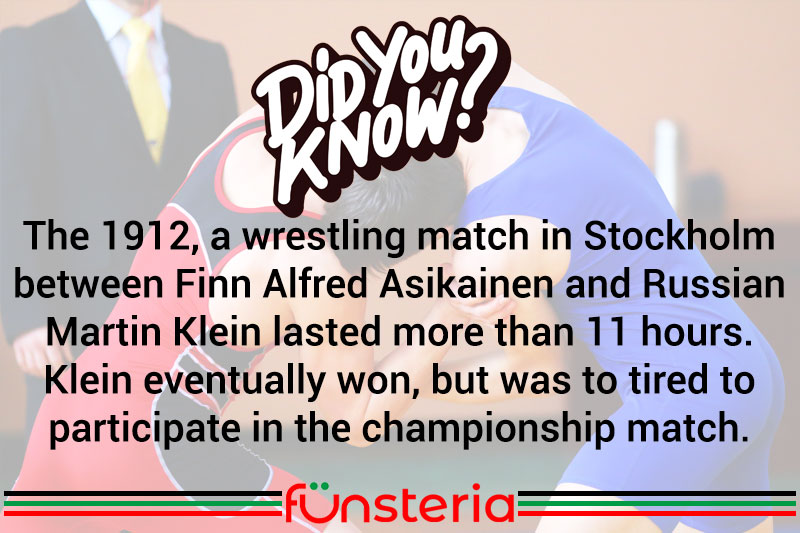 The Olympics have given us many memorable moments, where spectators and competitors wait with baited breath, and each second stretches out until it seems like hours. But at the Stockholm Olympics in 1912, not one, but two Greco-Roman matches would turn into marathons.

The style of wrestling itself, originated in the days of the first Olympics, and was resurrected in 1896 as part of the modern Games. Freestyle, which allows the use of the legs, was added in 1912, although it was dropped for the Stockholm Games. Whether that would have affected the mind-numbing siege in the middleweight semi-final, was a moot point.

Martin Klein for Russian, and Alfred Asikainen of Finland, grappled for a record 11 hours and 40 minutes, before Klein managed to pin his opponent. But he was so exhausted by the prolonged bout, he could not even attempt the final, and the gold medal went by default, to Claes Johanson of Sweden.

Running a close second for length, with an even more bizarre outcome, was the heavyweight class. Anders Ahgren of Sweden, wrestled Ivar Bohling of Finland for nine hours in the final, before the judges called a halt, not because of concern for the athletes, but because the panel considered neither one of them superior enough to be declared the winner. The rules of the sport require that the winner of a match be of superior skills, and since neither of them qualified, both were awarded silver medals.