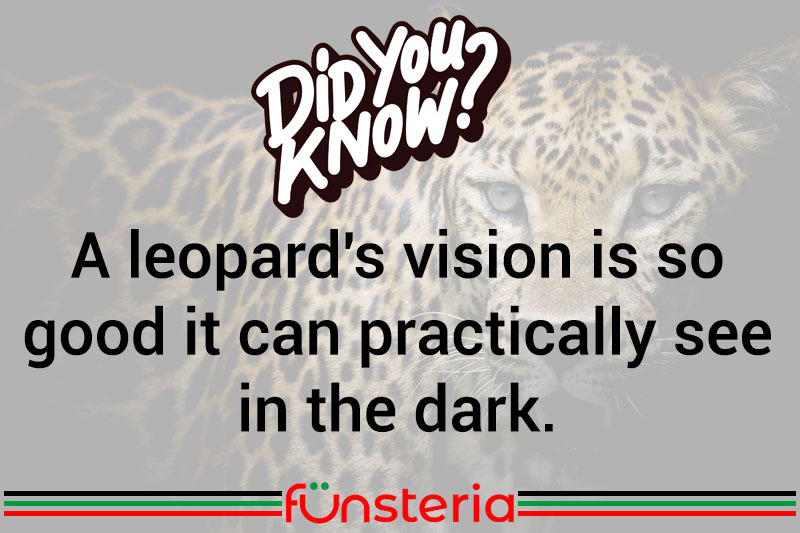 My, what big eyes you have Mr. Leopard. And the size of those eyes, is why leopards are such superb, nocturnal hunters.

The size of the leopard’s eye allows it to dilate beyond the range of the human eye, or the eyes of their prey, letting in the very lowest level light. They go undetected in the dark, while still able to stalk a victim through visual contact.

Scientists attempting to study the nighttime habits of animals like leopards, were frustrated in their research until the development of infra-red cameras. To understand what allows images to be captured on film in the dark, it helps to take the five-second lesson in how “light” works.

Light exists in waves of different lengths, which also provides us with the range of colors we see. At the shorter end of the spectrum, you have violet light, and at the longer end, there is red. Light is absorbed by, and bounces off objects, giving illumination that enters the eye and allows us to “see”. There are shorter and longer waves at both ends of the spectrum, all of which are around us in everyday life, but invisible because our eyes are incapable of picking them up.

Beyond the extreme end of the color spectrum that the human and animal eye can see, is infra-red. While we can’t see these light waves, researchers were able to create film that was sensitive to them, and thus able to record in total darkness. The benefit of course, is that animal behaviorists can film leopards and other animals in their natural nocturnal state, without alarming or disturbing them.

The technology that made this possible, has also produced light sensitive items ranging from night vision goggles, to alarm systems.