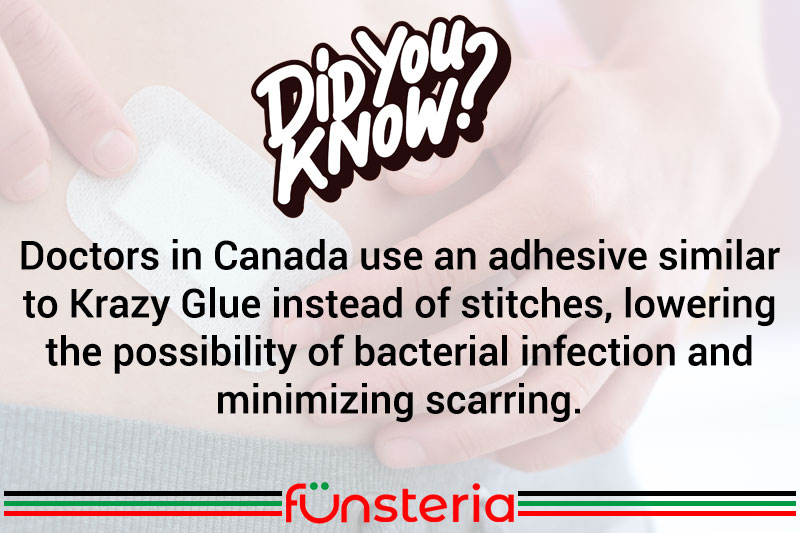 Since the first glue factory opened in Boston, Massachusetts, way back in 1807, the sticky stuff has been used for every conceivable purpose known to man, and then some. The latest, of course, is surgical adhesives that seal incisions without those unsightly bits of catgut hanging out everywhere. But what do you do with those pesky paper cuts you get at the office?

You can either slap on a band-aid that never quite seems to keep the cut closed, or go “au naturel” and have it continue to open and sting, or you can haul out the Krazy Glue, and in a couple of seconds, forget it ever happened.

The idea for using hydrocarbon-based ethyl cyanoacrylate resin adhesives, a.k.a. Krazy Glue, as a repair for cuts, apparently originated out of necessity, during the Viet Nam war era, when medics were faced with open cuts, and neither the time nor proper materials for suturing.

Applying the glue seals the lips of an open cut, allowing the dermal and epidermal cells to form their own bridges, and heal the wound. Doctors who are proponents of using it for home accidents note that it’s not useful for things such as scrapes, which are large, open areas, and which heal from the inside out.

The makers of Krazy Glue, however, are quick to remind consumers that they do not market it for medical purposes, and in fact, the labels warn against touching it to skin.

Some people are highly allergic to the ingredients, and it takes either acetone or extended softening in soap and water to get it off. Not to mention, should you seal a cut on your finger, and feel the urge to scratch your nose, things could get more than a little sticky.