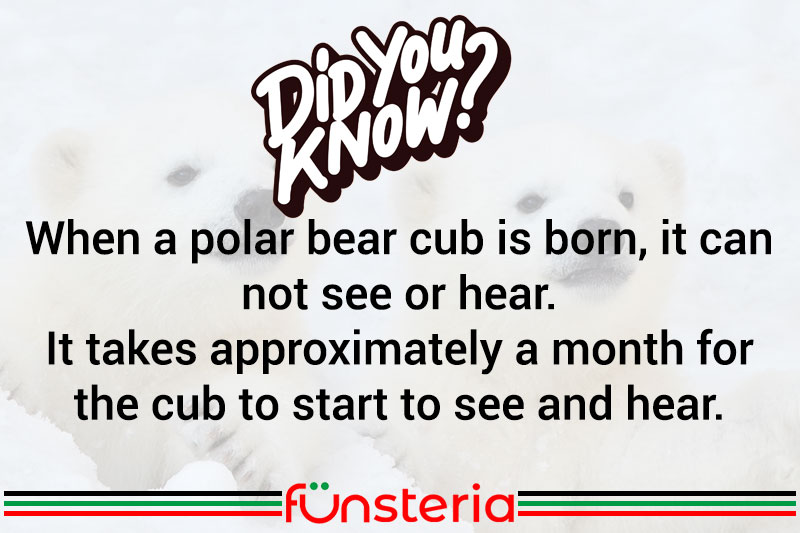 Just a foot long, and a pound at birth, polar bear cubs have to be born in one of the most inhospitable environments on Earth. But thankfully, Mother Nature did consider their primary location in the Arctic, when she decided how and what they were going to do, once they got there.

Polar bear cubs are conceived in the summer, usually two at a time. The fetuses do not develop until later in the Fall or early winter in a process called “delayed implantation”. This allows the mother bear to become fat on summer hunting, and to prepare a winter den, where the cubs will be born and cared for.

Born blind and deaf, their hearing kicks in before their eyes open, at around one month. The cubs enjoy a prolonged adolescence of around two years, mainly due to the harsh living conditions. Scientists believe starvation is the main cause of death in young bears, which is why in the furthest reaches of the north, cubs may stay with the mother up to three years. A mother’s health also directly impacts the cubs’ chances of survival, since it is her who is supplying the milk until they learn to hunt seals, the polar bears standard diet. Lack of food for the mother means weaker cubs less likely to survive, and which become potential prey for males seeking to mate.

The polar bear grows a coat that is thick and wooly next to their skin, with another layer of hollow hairs that repel water. Their black skin absorbs the sun, and the coat then holds in the heat. In fact, they are so well adapted to the cold that they easily overheat. Which seems odd, when you realize their body temperature is exactly 98.6F, the same as a human’s.